The craziest working arrangement I ever had in the screenwriting biz was when I worked for a producer I’ll call Joan Stark.

Joan insisted that I write in her office. I had to come in every day. Joan gave me a little cubbyhole beside the photocopy machine. I’d work on pages all morning and half the afternoon. Then we’d meet and Joan would go over the day’s work and give me corrections. 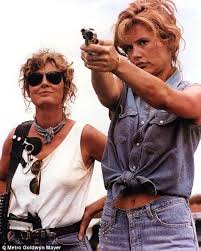 Every day she had problems with the same character—the villain.

She kept making me rewrite his scenes. One day I asked why. What mistake was I making?

Because if the villain changed, he’d be the hero.

I remember thinking, That is the dumbest thing I’ve ever heard. Don’t we want the Bad Guy to be interesting? Shouldn’t he evolve like the Hero?

I realized I had to start thinking more deeply about this.

All these Bad Guys have one single-minded desire.

To eat your brain.

To suck your blood.

To destroy (or dominate) the world.

To give birth to baby Bad Guys.

Racism in To Kill a Mockingbird, The Help, BlacKkKlansman.

The societal villain in Thelma and Louise, written by Callie Khouri, (who won the Oscar for Best Original Screenplay) is male contempt for and domination of women.

None of these Bad Guys changes.

What’s interesting about Callie Khouri’s character construction is that she does give us one decent man—Arkansas State Police investigator Hal Slocomb (Harvey Keitel). Hal is the only one among the cohort of law enforcement lummoxes pursuing Thelma and Louise who actually has sympathy for the women’s predicament and wants to help them. Hal even strikes up a bit of a telephonic friendship with Louise (Susan Sarandon) as he seeks to keep the police chase from getting out of control and devolving into a bloodbath.

Does this make Hal a villain-who-changes and thus an exception to my producer boss Joan Stark’s rule?

In the movie’s climax, when Thelma and Louise flee from the cops toward Grand Canyon thin air in their ’66 Thunderbird convertible, it’s Hal who rushes forward on foot into the path of all-out police gunfire to try to stop (and save) the ladies.

Does Hal’s act make him a villain who changes?

But our employer Joan Stark comes out right in the end.

Hal becomes by his actions not a villain but the protagonist of the “C” or “D” story—the Police Chase Subplot.

He becomes a hero.