[Resuming our deep dive into the structure, characters, and theme of the classic 1953 Western, Shane.] 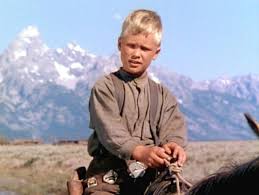 Brandon deWilde as Joey in “Shane”

The character of Little Joe or Joey (Brandon deWilde) is worth examining in some detail because he serves so many purposes in the story yet, if you think about it, the core of the drama doesn’t need him at all.

The movie is really about the gunfighter Shane (Alan Ladd) and the dynamics between him and Joe Starett (Van Heflin), him and Joe’s wife Marian (Jean Arthur), him and the cattle baron Rufe Ryker (Emile Meyer), and him and the gunslinger Wilson (Jack Palance).

If you and I were composing this tale from scratch, we might ask this very question:

Do we need this character at all?

Without Joey, there might be a story, but it wouldn’t carry half the emotional resonance or dramatic weight.

Let’s start our examination with the novel Shane by Jack Schaefer from which the movie originated. Consider the first two sentences:

He rode into our valley in the summer of ’89. I was a kid then, barely topping the backboard of father’s old chuck-wagon.

In other words, Joey is our narrator.

More important, Joey is our point of view.

In the book and in the movie, we the readers/audience will see everything through Joey’s eyes. This is critical.

Consider this comparison from the opening of another novel of about the same vintage:

When he was nearly thirteen, my brother Jem got his arm badly broken at the elbow … I maintain that the Ewells started it all, but Jem, who was four years my senior, said it started long before that. He said it began the summer Dill came to us, when Dill first gave us the idea of making Boo Radley come out.

From the first words of To Kill a Mockingbird, we are seeing the world through six-year-old Scout’s eyes. That point of view will color everything. We will see Tom Robinson through Scout’s eyes, and Bob Ewell, and Mayella Ewell. And we’ll see Scout’s father, Atticus Finch. 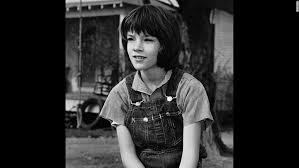 Mary Badham as Scout in “To Kill a Mockingbird”

To Kill a Mockingbird will not be about Scout, any more than Shane is about Joey. Each character, instead, will be our window into the tale.

The thing for us as writers to keep in mind here is that this—the telling of the story through the eyes of one specific character—is a deliberate, conscious choice on the part of the artist.

From minute one of the movie, Joey is smitten with Shane. Tucked into Joey’s belt is a carved wooden six-shooter, which he loves to “draw” in make-believe gun duels. On Shane’s hip rides the real thing.

Shane is obviously a gunfighter. Joey has probably never seen such a creature in his whole young life. His world is the universe of his father and mother and the other homesteaders in the valley—honest, hard-working, salt-of-the-earth farmers and ranchers, utterly devoid of glamour or romance.

Suddenly into Joey’s ken rides what to his impressionable young boy’s eyes must be the most magnetic, charismatic entity imaginable. Joey recognizes Shane’s vocation at once. He sees it in his buckskin shirt and trousers, the silver-studded saddle and bridle of his horse, and the way the man carries himself.

Big Joe too recognizes Shane at once for what he is.

Big Joe is too decent a man to deny the stranger a drink of water or even hospitality for the night. But his strongest (unspoken) wish is that this rider will saddle up in the morning and move on.

Joe’s wife Marian feels the same, at least the “mother” side of her. She doesn’t want trouble either. Though her woman’s heart, if she were willing to truly plumb it (which she isn’t), might admit that she is not entirely unmoved by the sex appeal of this obviously dangerous stranger.

But we are not seeing Shane through Joe’s eyes or Marian’s.

We’re seeing him through Joey’s.

Just as we see Atticus Finch through Scout’s eyes.

And through both these lenses, our protagonists can do (almost) nothing wrong.

This will prove critical as the tragedy of Shane (and it is a tragedy) unfolds.

More on this subject in the coming weeks.