The Kind of Crazy We Want

We said in a previous post, “Pick the idea that’s craziest.” 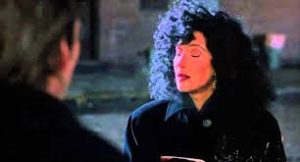 Nicolas Cage and Cher in “Moonstruck”

But what exactly do we mean by “crazy?”

Here’s what we DON’T mean:

We don’t mean pick a prospective project that’s ridiculous or absurd or so weird or personal or self-indulgent that there’s no chance of it finding an audience.

What we do mean is,

Free your thinking from conventionality.

Don’t second-guess your potential readers, and especially don’t think down to them.

Don’t pick the idea you imagine they’ll like, or believe they’ll respond to.

Pick the idea you like, even if (especially if) it doesn’t seem commercial.

By “crazy,” we also mean

Pick an idea that seems beyond you.

Choose something that makes your palms sweat. When Charles Lindbergh told his friends in 1926 that he intended to fly the Atlantic solo, I’m sure no few responded, “Charlie, that’s crazy!”

That’s the kind of crazy we want.

Did you see the movie Moonstruck? There’s a great line in the script by John Patrick Shanley delivered by Nicolas Cage as “Ronnie Cammareri” to Cher as “Loretta Castorini.”

You’re gonna marry my brother? Why you wanna sell your life short? Playing it safe is just about the dangerous thing a woman like you can do.

Work outside the lines.