A Prayer to the Muse

The first thing I do when I enter my office each morning is to say a prayer to the Muse.

I say it out loud in dead earnest.

The prayer I say (this is in The War of Art, page 119) is the invocation of the Muse from Homer’s Odyssey, translation by T.E. Lawrence, the Oxford-educated classical scholar also known as Lawrence of Arabia.

When he wasn’t leading the Arab Revolt of WWI, T.E. Lawrence found time to do a little translating

We were speaking last week about conceiving of our office/studio as a sacred space.

For me, this prayer is part of that process.

The prayer was given to me by one of my first writing mentors, Paul Rink. He typed it out and gave it to me. I still have it. The paper is slowly crumbling. It looks like an artifact from Lara Croft, Tomb Raider.

But the prayer itself is indelible, and it’s for real.

I say it each morning before I sit down to work because I know, as every artist who will tell the truth knows, that “I” am not the source of any of the work I produce.

The work comes through me from another plane.

But the source lies elsewhere.

I can’t compel the work to appear.

I can’t make the goddess deliver.

I can’t bribe her, or coerce her, or grovel before her, or make her any pledges or promises that will induce her to do what I wish.

I can only invoke her.

That’s what Homer was doing when he began the Odyssey with these verses: 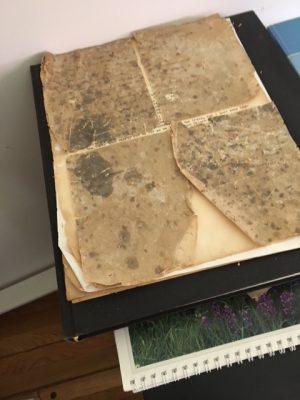 The original typed version of the Prayer to the Muse, given to me by Paul Rink. (It was new once.)

sustain for me this song …

He did the same in the Iliad, with

of the wrath of Achilles, Peleus’ son …

If someone were following me around on a working day, she might think I was a little nutty. Certainly if she looked inside my head and saw the way I was conceiving the activities of each morning—from getting up and brushing my teeth to going to the gym to crossing the threshold of my office—she’d be forgiven if she thought, This dude is off in airy-fairy land.

I’m living in the absolute real world—the world of the mystery of creation, which no one understands and no one ever will.

I’m doing my work the same way the crypt carvers of Petra did theirs, or the musicians in the court of Louis the XIVth, or Hemingway and Gertrude Stein in Paris in 1921.

I’m doing it the same way Homer did, and by the same rules.