Up From the Trenches

About eighteen months ago I wrote a series for this blog titled “Report From the Trenches.” The posts were about a particularly ugly run of months when I was struggling with a book-in-progress that had crashed at the finish line.

The struggle was about starting over.

It was about not caving in to the massive Resistance that arises when you, the writer, have to go back to Square One and rethink everything.

That book was published yesterday. 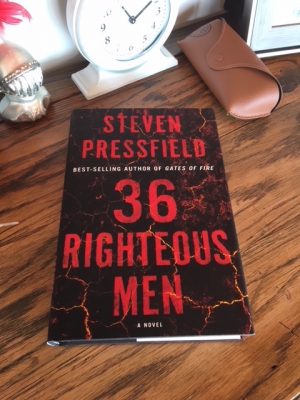 “Too dark, too depressing, too dystopian.”

Like just about everybody who reads this blog, I have a really hard time flogging my own stuff. So all I’ll say is the book is titled “36 Righteous Men,” it’s an apocalyptic thriller that Publishers Weekly called “un-put-downable” and “Pressfield’s most ambitious work to date.”

“36 Righteous Men” is published by W.W. Norton, and it’s on sale everywhere, in bookstores and online.

Oh, one other anecdote:

Even when the rewrite had been completed and the manuscript was what Shawn and I rated a huge success, we still couldn’t find a publisher.

“Too dark,” people said. “Too dystopian.” “Too depressing.”

We basically gave up.

Three years of backbreaking work down the drain.

Then I had a crazy flash.

My original agent, from Bagger Vance and Gates of Fire days, is Sterling Lord.

Sterling represented Jack Kerouac in 1953. He made the original sale for On the Road.

I wasn’t sure he was even still speaking to me.

I called him up. “Sterling, I’ve got a new book that nobody wants.”

Three weeks later we had a deal.

And not just with any editor but with a legend of the publishing business, Star Lawrence.

In other words, NEVER GIVE UP!