Kiwi Virtues in a Time of Trouble

A few years ago when I was researching my WWII book Killing Rommel, I immersed myself in reading about a British commando unit called the Long Range Desert Group.

Have you heard of these guys? 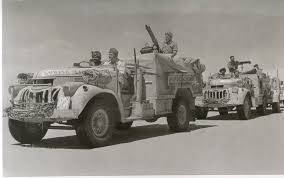 They fought behind the lines against Rommel and the German Afrika Korps. Their vehicles were civilian Chevy “hundredweights,” i.e. ton-and-a-half pickups. Into these they packed fuel, water, weapons, navigation gear, and spare parts. Their theater of war was the North African desert. In patrols of six to eleven trucks they routinely ventured a thousand miles from the nearest aid to work “beat-ups” on Axis airfields and to provide reconnaissance, transport, and intelligence to Gen. Wavell and later Gen. Montgomery and the British Eighth Army.

In one call for recruits, eight hundred applied. The LRDG took twelve.

What, you may be wondering, does this have to do with the corona virus and the panicky pandemic times we find ourselves in right now?

The link is the mindset that these Kiwis (and, later, Rhodesians and Brits and others) brought to one of the most emotionally and psychologically challenging assignments any soldier could face.

But here’s what was fascinating to me about the selection process for the Long Range Desert Group:

The commanders did not want supermen. They weren’t looking for elite athletes who could do five hundred pushups or fire-breathing warriors with chests plastered with decorations for valor.

The ideal volunteer to face the loneliness and isolation of the desert was a working man, preferably a husband and father. Most LRDG selectees were older by ten years than the average front-line soldier. Many were farmers and stockmen. No few owned spreads of 10,000 acres and more.

The LRDG wanted men who were happiest with their hands dirty. They sought volunteers who could fix tractors and farm equipment, who had cared for sick livestock and dealt with drought and famine and flood. They wanted men who could grade roads and dig themselves out of ditches and downpours. Patience was a virtue prized more highly than martial valor. The type of individual the LRDG sought was a fellow who could work in close quarters with others under conditions of extreme stress, who did not flee from adversity but rather sought it out and throve on it.

The commanders wanted men with a sense of humor. Good mates in a pinch, as they phrased it.

That’s what you and I need right now.

We need the Kiwi virtues.

Nothing fancy. Nothing heroic. Just do our part and be there for our mates in trouble.

[For a visual glimpse of the Long Range Desert Group, here’s a video I did a few years ago to promote Killing Rommel: https://www.youtube.com/watch?v=zHjxQmxZDuA]