The All Is Lost Moment, Part Two

SP: Jen, what are your own favorite “All Is Lost” moments from movies?  Can you give us one from something recent and then break it down for us?

George Clooney and Vera Farmiga from "Up In The Air"

JG:  I love the “All Is Lost” moment from the George Clooney movie, Up In The Air, screenplay by Jason Reitman and Sheldon Turner from the novel by Walter Kirn.

To set the stage, Ryan (Clooney) is an executive whose job is to fire people. When companies downsize, they outsource this unpleasant task to the company Ryan works for; he flies in and does the dirty work.

Ryan’s life is built on non-commitment. He’s most at home in an airplane. His philosophy is expressed in a speech he sometimes gives to corporate audiences–“What’s In Your Backpack?” The fewer attachments, the better. Ryan keeps moving because he believes, as he says, “if you slow down, you start to die.”

However, Ryan has met and fallen in love with Alex (Vera Farmiga), though he hasn’t yet admitted this to himself. Will he commit to her and risk getting “grounded,” which to him equates to death?

One other detail from one of the B stories: Ryan’s sister is getting married; she has sent Ryan a big cut-out photo of herself and her fiance, asking Ryan to take pictures of the cutout with various famous landmarks in the background (since she and her groom-to-be lack the wherewithal to travel.) Ryan is doing this for his sister grudgingly: more evidence of his commitment phobia.

In the following scenes, we get two “All Is Lost” moments, one personal and one professional, which come together to form one unified “All Is Lost” moment.  Here: Ryan has gone on the road–another assignment to fire people–with junior executive Natalie (Anna Kendrick), who has seen Ryan interact with Alex and witnessed both Ryan’s growing attachment to Alex and his aversion to commitment.

The isolation? The traveling? Is that supposed to be charming?

No, it’s simply a life choice.

It’s a cocoon of self-banishment.

Well, screw you too.

You’ve set up a way of life that basically makes it impossible for you to make any human connections. Now, somehow this woman runs the gauntlet of your ridiculous “life choice” and comes out the other end with a smile – Just so you can call her casual. Jesus. I need to grow up? You’re a twelve year old.

I don’t have a gauntlet of …

A gust of wind suddenly blows the cutout (the wedding gift for Ryan’s sister) across the boardwalk into the ocean.

Ryan goes running after the cutout. He climbs down to a dock that is closest to the cutout, which is about to sink into the filthy water.

Ryan, still damp from the ocean, is drying the cutout with a hair dryer. 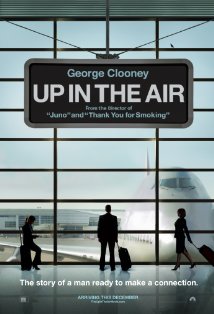 For Ryan in "Up In The Air," being grounded equates to dying.

This is the personal half of the “All Is Lost” moment. Ryan’s commitment phobia, symbolized by his sister’s cutout, has made him crash into the water. It has caught up with him and forced itself into his consciousness.  Next the movie gives us Ryan’s professional “All Is Lost” moment:

At Ryan and Natalie’s next corporate stop, they find a video-teleconference monitor set up. This is Natalie’s idea–a way to fire people remotely, so you don’t have to fly to the business site and do the dirty deed in person. Craig (Jason Bateman), Ryan and Natalie’s boss, tells them over the phone that it’s time to try out this new system. He wants Natalie to do it.

The first man Natalie fires has a very emotional reaction. Natalie responds with anguish. She realizes that she hasn’t got the stomach for this work; she has too much empathy–firing people is horrible! Ryan tries to buck her up. He reassures her that she did a good job. She looks down at the huge list of all the other people she needs to fire.

At the airport, Natalie apologizes to Ryan for what she said about Alex. Ryan leaves and tells Natalie that there’s something he has to do. He’ll meet her at work.

The “something” Ryan has to do is call Alex and ask her to accompany him to his sister’s wedding–in other words, a courageous gesture of commitment.

In the moment when Natalie was coming unglued, firing people, Ryan hits bottom in terms of remaining distant, unattached, selfish. He can’t stand himself. He reacts; he rescues Natalie, in defiance of his boss who is ordering them both to keep going.

Ryan then chooses to go see Alex. By doing this, we see that he was triggered by Natalie and hitting the “All Is Lost” moment in the professional sense sets him up to take action in the personal. Phoning Alex demonstrates his willingness to commit.

(The fact that Alex betrays Ryan in the end is irrelevant to his own inner journey. Ryan has done the right thing. He has overcome his fear. He has changed. This is demonstrated later when he intervenes in a crisis at his sister’s wedding to talk the groom out of bolting, and, later, when he gives his sister and her new husband his hard-earned air miles so that they can, at last, travel to all the places they’ve wanted to go.)

SP: You don’t have to answer this, Jen, because it may be too personal … but what about an “all is lost” moment in your real life?  Can you tell us one – and what you learned from it?

JG:  I’ve had two “all is lost” moments in my own life.  My first was when I found out that my ex-husband was cheating and that my new marriage was over.  More than the actual marriage, it was the shattering of the fairytale that was an “all is lost” moment for me.  I learned so much from it about myself.  I learned about the choices that I was making.  I learned how to take inventory of what was going on inside of me.  I learned that when we love, it’s really about what it brings out inside of us.  I learned that love for self is the most important type of love because everything in life stems from this.  You can’t love others in a healthy way if you don’t love yourself first in a healthy way.  Since my own divorce, I’ve probably helped 25 people through divorce so I know that there was a purpose.  This is what story is all about.  We go through our falls.  We gain the tools to heal.  Then, we pass our story onto others so that they can do the same.

My second “all is lost” moment is when I lost my job.  I had worked at two sister studios for 15 years when I was told that my contract was not being renewed.  In this life moment, as devastating as it was when I was in it, I was forced to shift my life in a whole new direction.  It was the beginning of a new chapter.  It led me to the recognition that after I went through my divorce, I married my job.  So, it was like going through a second divorce.  When I hit this “all is lost” moment, I accepted the nudge the universe gifted me and it triggered me into action.  I wanted to create the destiny that would make me the happiest.  So, I looked at what I loved the most about what I did as an executive.  What I loved the most was working with writers and the development of story.  This is what I did all day everyday for 15 years.  So, I put everything that I loved about my job into a business, minus what was not in alignment with my spirit while working at the studio.  Soon, I created a six-figure business that was doing what I love.  I wrote my book, “Story Line:  Finding Gold In Your Life Story” and I became the Writing Instructor for NBC’s Writers on the Verge and a blogger for The Huffington Post.

JG:  There are many questions that I ask writers when I work with them on a screenplay or novel. I start with, “Do you have a powerful dilemma that leads to a clear goal?” This is the foundation of my philosophy because all the other points need to resonate back to the goal.  If the goal is not clear, the story will not work.  From this, we go into the “all is lost” moment and other pivotal points that will help make the script or novel the best it can be.

As for the “all is lost” moment specifically, when I read a writer’s material I urge him to identify it and then to make it as strong as possible. If it is not strong enough, I guide the writer by reminding him that this is the point in his story where his central character hits his or her lowest point. The hero is as far away from achieving the goal as possible. This moment is critical because it reveals deep character–and because it triggers our hero into taking the decisive action that will define him or her and resolve the dilemma of the story and of their lives. This is the “aha!” moment.  The light bulb goes off.  The protagonist realizes what he or she needs to do to bring their life back in balance.

SP: Jen, will you come back in a while and do another interview for Writing Wednesdays? I want to ask you about log lines. That’s a subject that screenwriters know intimately but that a lot of other storytellers (including me) are clueless about.

JG:  I would LOVE to come back to do another interview for Writing Wednesdays.  I am a huge fan of your writing and the work that you do with writers.  You are an inspiration!  It would be a privilege to do this again.  Writing the log line is another favorite topic of mine.