There was a great article in the L.A. Times of August 19 about the B-52 bomber. Remember Slim Pickens in Dr. Strangelove, straddling a hydrogen bomb in the bomb bay of a Strategic Air Command plane, then dropping into thin air while cutting loose a Rebel yell? 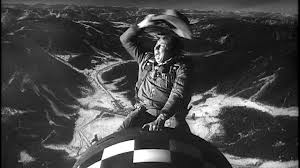 In real life the aircraft first saw service in the 1950s. It’s still flying today. With the latest upgrades, the B-52 is expected to remain as the Air Force’s #1 workhorse bomber into the 2040s.

But here’s the sentence from the article that leapt out at me:

Now the plane, which was designed on the back of a napkin over a weekend in 1948 by three Boeing employees …

The longer version of the design story, from the Boeing website, relates that Boeing had proposed earlier in 1948 a six-engine, all-propeller model, called the XB-52. Chief engineer Ed Wells and his design team happened to be in Dayton, Ohio, when the air force phoned: “Scrap the props. Give us an all-jet version.” The team holed up over the weekend in a Dayton hotel. By Monday, they had designed the plane.

In other words: brass balls, back-of-a-napkin, see-the-thing-as-a-whole. Don’t hesitate. Don’t overthink. Use instinct, use common sense. Don’t give Resistance time to screw you up.

Next Wednesday we’ll get into this in detail on the blog with the first of two ten-minute videos about how to use the Foolscap Method in writing a novel. But I couldn’t resist, today, taking notice of the B-52. There must be a million stories just like this, of bridges built, skyscrapers designed, businesses launched, and screenplays written. 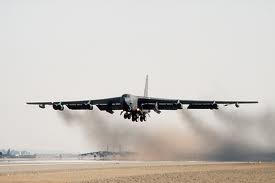 The Boeing B-52, still flying after all these years.

Why does the back-of-an-envelope system work? I know how Shawn would answer. He’d say “Genre.”

No enterprise—no matter how complex or ambitious—is as difficult as it first seems. Every project falls into a genre, and every genre has conventions. Conventions take the mystery out of it.

A plane is a plane. It has wings. It has a fuselage. It has a powerplant.

A play is a play. It has Act One, Act Two, Act Three. It has characters, it has a theme, it has crisis/climax/resolution.

Suppose the Air Force had locked you and me in a hotel room on a Friday evening: “Come out by Sunday with a new bomber.”

We could have freaked. We might’ve panicked. We could’ve drained every bottle in the mini-bar. Or we could’ve gotten out a No. 2 pencil and solved this bastard on the back of an envelope.

Would such a solution be shallow? Superficial? Temporary?

With any luck the B-52 will still be flying in 2048—one hundred years after that Foolscap weekend in Dayton.