Return of the Foolscap Method

My apologies to everyone who got psyched up, a few weeks ago, to learn more about the Foolscap Method (which I wrote about then in this space and promised to write about again), only to have me drop the ball completely. Sorry! 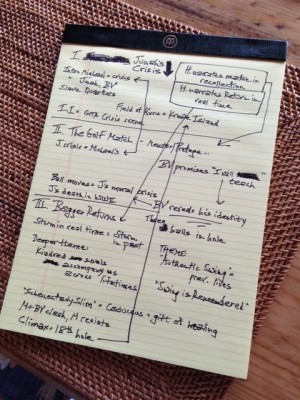 There’s a reason. We’ve been working feverishly over the past few weeks to re-jigger this site to handle some new long-form material that we want to make available to our regular readers. That’s what the FIRST LOOK ACCESS box is all about, above and to the right.

Bottom line: the Wednesday after next, we’ll be ready. We’ll start with one ten-minute video from me about the Foolscap Method, then another ten-minute video the next week—all building to a new long-form piece about Writing A First Novel.  In other words, what it takes to go from unpublishable to publishable.

The piece is by me, from my own experience with my own first published novel, The Legend of Bagger Vance. Trust me, the Foolscap Method played a huge part in that breakthrough, and it can be invaluable for any writer (or artist or entrepreneur) struggling to get over that same hump.

The photo above is the Foolscap I used to write Bagger Vance. It’s not the actual one. I lost that in a flood. But it’s a reconstituted version that’s probably a lot clearer.

In the first ten-minute video, I’ll talk about the overall concept of the Foolscap Method. In the second, I’ll get into this specific piece of Foolscap, line-by-line.

What is the Foolscap Method about? Basically, it’s a way to kick your own ass, either at the very start of a project or when you’re six months into something and you’re so lost you can’t remember where you started or where you’re trying to go.

Shawn, who is my editor and one of the best in the business, has a system of narrative organization he calls the “Story Grid.” He invented it himself. He’s been using it on my stuff for years. I bring him a sprawling, shapeless mass of goo. He puts the Grid on it. Out comes a real book. A book with a beginning, a middle, and an end. A book that works. A book that sells.

Shawn’s Story Grid is the Einstein version of the Foolscap Method. Or, put another way, the Foolscap Method is the village-idiot version of the Story Grid. But they are both indispensable (they or some system like them) for anyone who aspires to move from unpublishable to publishable—or from published-already to really-really-good published—and whose name is not James Joyce.

Oh, P.S. In a few months we’ll also be bringing out Shawn’s Story Grid (with many extra goodies) here on this site in full-length format for everyone who has signed up for First Look Access above. More news as the date approaches.

Again, my apologies for the delay getting the Foolscap/First Novel pieces out sooner. I shoulda foolscapped ’em. But they’re on their way. Wednesday after next, I promise.