Continuing from last week’s post: How did my friend Paul change via the process of writing and completing his first novel? 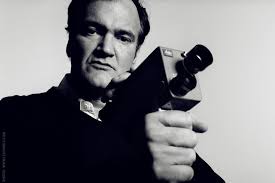 Quentin Tarantino couldn't have done it.

I offer the following thoughts to Paul as well as to our readers, not as “lessons learned” of “the right way” or “the wrong way.” What follows are only observations. They’re subjective. I may be wrong. This is just what I saw, or what I think I saw.

Let’s start with BEFORE:

Before the novel, Paul’s sense of well-being and self-satisfaction was tied almost exclusively to externals. He doesn’t have kids, but he does have a very involved core of friends, family, women in his life, a business, clients, etc. How well things were going on these fronts constituted (pretty much) Paul’s gauge of “How am I doing? Am I happy? Is life okay?”

In other words, Paul’s orientation was “normal.”

That was before the novel.

(By the way, this is an exact description of my own life before.)

When I used to talk with Paul about the Muse, he sorta bought into it, but not really. The concept of a higher plane was something he grasped intellectually and appreciated in his own way. But it had no real existence in his inner world, and no material bearing on his life.

Internally on other fronts, there was lots of anger, frustration, drama. Romantic sturm and drang dominated Paul’s life. In the world of friends and family, there were many trips, parties, weekends hanging out with his peeps, lots of stuff at night out on the town.

This was the Big Dream. It constituted a major part of Paul’s self-image and his hopes for the future. But Paul knew he wasn’t really doing it. An invitation to a weekend in Hawaii would come in, and he would say yes. He wouldn’t write. The Fourth of July holiday would pass and Paul would have put nothing on paper.

Inside, though he never said this aloud, I felt the despair and self-loathing building up. Paul wasn’t getting any younger. He had to be asking himself, “Am I just gonna talk about this, or am I ever gonna really do it?”

This dimension remains a force, as indeed it should. But it has faded dramatically in importance. The idea of getting wasted and partying all night has lost its appeal utterly. A new immunity has arisen. Paul has turned a page. There’s still abundant action in the social world, but Paul’s sense of self is no longer tied to it and no longer dependent on it.

All of a sudden, the Muse has popped up. She has taken over.  The goddess has gone from an entity that was largely abstract and theoretical in Paul’s life to a palpable force that is present in every centimeter of his airspace, like radio waves that permeate the unseen dimension and vibrate and hum even within the cells of his body.

Paul believes in the Muse now.

He has learned her rules (mainly by breaking them and experiencing her retribution). He is like a lab rat that’s been given a taste of the 10,000-volt electrified cage floor. He has gotten the Muse’s message, and the message is this:

“Paul, whatever pain you imagine you’re evading at this moment by NOT sitting down and writing … that is NOTHING compared to the torment I’m going to inflict on you tonight and the next day and the day after that for this crime.”

But Paul has also learned to love the goddess.

Have I heard him speak the phrase “better than sex?” Let’s say only that a new source of satisfaction has entered Paul’s life, and that source has eclipsed all that went before it.

Paul’s anger and frustration have not gone away. But they have altered character completely. He is now frustrated by the work—and the learning curve required to get a handle on it. His ambition and aspiration at last have a field that is worthy of them and upon which they can expend their full energies. Despair is gone. Guilt has vanished. Boredom and restlessness have fled.

These afflictions have been replaced with a secret wonder and humility. Like me, Paul is a Muse-driven writer. What I mean by that is that he doesn’t decide with his conscious ego-brain what he is going to write. Instead, his unconscious Quantum-soup brain makes the decision—and then compels him to act upon it.

How did this happen?

It happened when two fictional characters appeared in Paul’s head one day and started speaking lines and acting out scenes. The scenes were so perverse and the dialogue so dark that Paul ran away from them at first. “How could this be coming out of me?”

Then he surrendered. He started putting these guys’ lives onto the page.

What came out had a life of its own. A dark life, yes. An extreme life. But after reading the first few chapters, I gave Paul the two highest compliments I can pay a writer.

I’m only half-joking. The point is that Paul is following an inner compulsion. Characters have arisen. They are taking actions. Paul is not fleeing from those characters and that action. They arose from him. He is serving them.

No other writer could have written the pages Paul is writing. Not Hunter S. Thompson, not Charles Bukowski, not Quentin Tarantino. Those pages are coming from Paul’s center. They are his voice.

The source of Paul’s sense of worth has shifted from the outside to the inside. I said in last week’s post that it is as if he has a little nuclear generator in his pocket and that nobody knows about it but him.

The Muse is that generator. She has become Paul’s new B.F.F., and the pair of them are cranking out the wattage.

Paul does not see the book he has just finished as a one-and-done. A whole shelf is coming. He’s got Number Two and Number Three lined up already.

That shelf-to-be gives Paul’s days meaning. He’s humble now. He’s patient. He has become an apprentice, but an apprentice who is shooting for the stars.

Rewards, if they come, will come later. Paul is not worrying about that. He has found a source of power that is his alone and that no one else can access. His journey lies before him now, and that has replaced everything that was important in his life before.