When You Publish a Book

The Lion’s Gate has been out for about a week now. 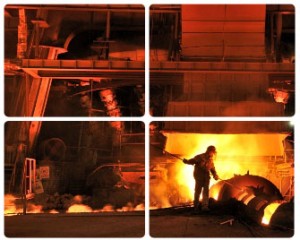 "We have the right to our labor, but not to the fruits of our labor."

The book represents, for me, three years of 24/7 work and an untold tonnage of emotion. Now it’s out there in the real world, on its own. Nothing I think or say or do will have more than the most negligible influence on the way the book is received.

The question for me now becomes, “How do I manage my own expectations?”

For what it’s worth, here is how I think about it:

First, I have been trained in the Tinseltown School of Having Your Heart Broken. It’s a good school. It’s great training. The screenwriter, particularly the spec writer (i.e., one who originates a project on his own), knows that even when she actually sells a piece and gets it made, she will be a) fired, b) removed from the project, c) cut out of all influence. When she finally gets to see the finished product, which is usually by buying her own ticket at some Edge City multiplex, she will find her vision mangled, mutilated, and misshapen. Sometimes she won’t even recognize it. Can she console herself by saying, Hey, at least I got paid? Yeah, but of course by then she has long since spent the money.

Books are much better. The field is level. You can’t be canned. No one will rewrite you. What you put on the page is what gets out there.

The problem with books is it’s so hard to penetrate the clutter. I don’t care how much you network, or how supposedly powerful your publisher is, your book is sallying forth into a marketplace that is overloaded, overstuffed, overstimulated.  Your work is swimming for its life in a sea of other thrashing, gnashing competitors.

My answer, the only answer that works for me, is to remember Krishna’s axiom from the Bhagavad Gita:

You have the right to your labor, but not to the fruits of your labor.

Paramahansa Yogananda told this story on one of his tapes (you have to imagine this being narrated in a wonderfully charming Indian accent:)

Diogenes used to live in a bathtub. One day a man gave him a carpet. A few days later Diogenes called the man to him again. “Please, take back your carpet.”

“But why, Master?” the man asked. “It is a wonderful carpet and I have given it to you with no strings attached.”

“My happiness was unconditioned by the carpet,” replied Diogenes. “And besides I don’t care to sweep it every day.”

In the East we are taught to keep our happiness without condition. Now perhaps we should not all live in a bathtub like Diogenes. But Diogenes understood that his peace of mind must be founded upon his own resources and not conditioned upon the external or the material.

So I am not checking the Amazon rankings every hour. I am not searching the press for reviews. I do this very deliberately and consciously. Through the day if I catch myself starting to root for The Lion’s Gate (which of course is completely human and natural), I pull myself up and very empathically make myself stop.

Months ago I began my next project. The next two actually. I am deeply into them. My heart is with them.

I hope The Lion’s Gate does well. I hope it finds an audience. I am out there right now beating the drums, speaking and giving interviews, trying to support the book.

But I recognize that a work’s reception in the marketplace is only tangentially related to its merit. Great stuff succeeds. But so does garbage. Sometimes garbage beats the hell out of qreat stuff.

And who’s to say what is great? Me? You?

You have a hit and it’s 90% luck. You have a flop with material that’s ten times better than your hit.

Even pure merit, if we could somehow define it with absolute objectivity, proves what?

Success and failure, in my experience, are visored knights. They’re illusions. Pull off the mask and one is the same as the other.

The mystery is trying to teach us something. Have you ever watched the World Series or the NBA Finals and seen the tears and grief on the faces of the defeated? I often think they are the ones who are touched by heaven. The loss they’re feeling, those tears, are spiritual gold.

In the end, for me, you must judge your own work and measure it by your own standards. No other opinion counts.

Don’t listen to the market.

And pay no attention to the critics, particularly—particularly—when they tell you you’re great.

I’ve written, I’m not sure what, a dozen or more books and about thirty screenplays, plus God knows how many projects of other kinds. I can say truly that I can look back on them and judge each one pretty accurately as to how good or bad it is.

We know when we can be proud of them, and we know when we wish they had tried a little harder or lightened up a little more at crunch time or just been a tiny bit more true to who they really were.

We are engaged, you and I, in a lifetime practice, not a series of one-shots by which we and the world pass final judgment upon ourselves. The arc of our journey is what counts—the arc and the momentum.

So I sit down quietly and I ask myself, of The Lion’s Gate or any other work:

Was this a worthy effort?

Did it call upon you to give more than you believed you had in you?

Did you conduct yourself honorably in the enterprise?

Did you give it all you had?

Did you succeed according to your own standards, the measures that only you know and only you can define?

Those are the only criteria I can control. They are “the labor,” not “the fruits of the labor.”

This is life. We are not gods.

It’s good to aspire; it’s worthy to strive; it’s honorable to clash on the field of excellence and ambition. But the prize, even when fortune favors us enough to let us grasp it, must be released in the end.

In Zen it is the sitting that counts. I try (though not always successfully) to keep myself centered in that mind.