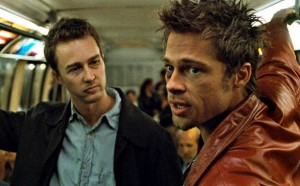 One fascinating aspect of premises is that they imply order. Start with any premise (say, in The Lord of the Rings, the idea that a certain ring commands the power of the universe) and when you dig to the next level, you get this:

The universe makes sense. Life has meaning. We humans are not lost and alone in a random, indifferent cosmos.

David Mamet says over and over in his books on writing that the human heart is programmed to perceive drama, i.e. meaning, in everything. That’s why we need stories. Because stories reinforce the idea of meaning. Drama starts at A and progresses to Z. Along the way, we learn. Truths are revealed. Secrets are disclosed. We walk out of the theater reassured. Life may be hard and brutal and justice may not always be served, but there is meaning and significance underneath it all.

That’s a what-if, but it’s not a conceptual premise.

Contemporary life has become so vapid and meaningless, particularly for young urban professionals, that it’s possible for a young man to become so psychologically unhinged that he creates in his imagination a totally convincing nihilistic alter ego and then becomes so dominated and carried away by this imaginary personality that he reaches the point of near-suicide and the embrace of actual urban terrorism. [Fight Club by Chuck Palahniuk (novel) and Jim Uhls (screenplay) starring Brad Pitt and Edward Norton.]

A powerful premise can produce a riveting emotional and intellectual experience, above and beyond that elicited by the specific dramatic narrative of the story. It does that because we walk out of the movie (or put down the book), thinking, “Wow, what if that premise were actually true? Is life really a matrix of engineered sensations, based on nothing except some powerful cabal’s need to control the world? Or even if that premise isn’t literally true, is it true as a metaphor?”

As writers, if we can identify our premise, we can harness it to work inside the story and to amplify powerfully the narrative’s impact.

The idea of the Authentic Swing came to me in the middle of a sentence, in the middle of writing The Legend of Bagger Vance. It just “fell out.” I stopped typing, stared at the phrase on the page, and thought, “Wow, that is great. That’s the whole book. That’s everything.”

Knowing the premise gave me a prism through which to view the entire story, scene by scene. I could ask myself questions like, “When should I introduce this premise? Should it be done overtly? Should a character actually verbalize it? Or should it just be there as an unspoken but undergirding element? Should it simply be reflected in the characters’ attitudes and actions without being expressed ‘on the nose?'”

In the case of The Legend of Bagger Vance, the premise and theme turned out to be intricately entwined. The premise was, “There is such a thing as the Authentic Swing/Self.” The theme was, “To live life at its most meaningful level, we must find our Authentic Swing/Self and swing/live it.”

My own belief is that every story has a premise. We as writers might not be aware of our own premises, even though every word we write is based upon them the same way every girder in a bridge is supported by its conceptual and foundational structures.

Are you working on a novel about Queen Boudica of early Britain? Have you got a cop story going? Or a Thomas Pynchon-esque megabook about the origins of the cosmos as reflected and refracted in a single teardrop?

There’s a premise in what you’re working on. Find it.

Ask yourself what precept, what principle is the architecture and  superstructure of your story based on? What’s the foundational truth (even if that truth isn’t literally “true?”) That premise is the lever and fulcrum with which you can move the world.

More on the writing of The Legend of Bagger Vance next week.