[Continuing our look back at The Legend of Bagger Vance, seeking writers’ lessons and insights on the book’s 20th anniversary. P.S. Don’t forget this year’s Black Irish Christmas Special, featuring the brand-new, leather-bound, signed and numbered (only 2500 available) anniversary edition of Bagger Vance.] 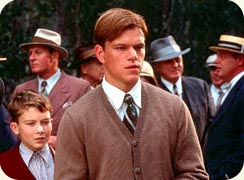 Matt Damon as Rannulph Junah in "The Legend of Bagger Vance." Behind him, left, is Michael Moncrief as the story's narrator, Hardy Greaves.

Sometimes a story—particularly fantasy, historical or sci-fi—needs a conceptual Premise. By that I mean a hypothetical truth that informs the drama the way, say, the airfoil-shaped wing informs the idea of an airplane.

The conceptual premise of The Legend of Bagger Vance is “the Authentic Swing.”

Here are examples of premises in fiction and movies:

1. A certain ring contains the secret power of the universe. Whoever possesses the ring possesses that power.

2. In the future, technology exists that can detect crimes before they are committed. “PreCrime” is a division of police departments in this future.

3. In the future, creatures called “replicants” have been created, which are virtually identical to humans. Replicants, by the nature of their genesis, have no memories of childhood or of any past before they were created. Thus, to control them and to keep them emotionally stable, their manufacturer has implanted artificial memories, which the replicants believe to be real. When replicants discover this ruse and see through it, it is deeply distressing to them.

1. Love and hard work can overcome (or at least mitigate) certain psychological conditions such as bipolar disorder.

2. It is possible to recreate the past, specifically to recover a lost love, through force of will, abundant means, and an overpoweringly vivid reinvention of oneself and one’s world.

(These are the premises of Lord of the Rings, Minority Report, Blade Runner, Silver Linings Playbook, and The Great Gatsby.)

One curious thing about premises: they don’t have to be true. A premise is simply the supposition upon which the dramatic superstructure of the story is based. The reader/audience doesn’t have to buy into the truth of the premise in real life as long as he or she accepts it in the story. Nor do all the characters in the drama have to believe in the premise (though of course it’s better if they do). It’s enough for one character to believe the premise (Jay Gatsby, for example). The story can work, based on that alone.

But back to “the Authentic Swing.” What exactly is it and how does it fit into The Legend of Bagger Vance?

The conceptual premise of The Legend of Bagger Vance—in other words, the dramatic myth on which the actions of the story are based—is that each one of us possesses his or her own unique golf swing. This swing is ours at birth. We can alter it a little through hard work and practice, but it is impossible to materially change it. As Tiger Woods has the Tiger Woods swing and Rory McIlroy has the Rory McIlroy swing, so do you and I have our own swings, even if we’ve never picked up a golf club.

The metaphor of course is the Authentic Self.

Each of us has one, and only one, swing/self that is “authentic” to us. The worst thing that can happen to us is to lose this Authentic Swing/Self. If we do, we will be compelled by our own emotional pain and distress to drop everything and attempt to recapture it at all costs.

I believe this theory absolutely, by the way. But a writer doesn’t have to believe the premise of her story. It’s enough that the premise be provocative enough and true-sounding enough for the reader/audience to willingly suspend disbelief.

If you’re working on a novel or screenplay now, does it have a conceptual premise? (Remember, not all stories have to have one.) If yours does, what is it? How are you using it in the narrative?

In The Great Gatsby, the premise is the emotional foundation of Jay Gatsby’s world.

But you can’t recreate the past.

Of course you can, old sport!

The inciting incident in The Legend of Bagger Vance is the moment (actually before the book begins) when the protaganist, Rannulph Junah, loses his Authentic Swing. In other words, he has lost his soul, his identity, his vision of himself as a human being.

How can he recover his Authentic Swing/Self?

His mentor, Bagger Vance, will show him as the story unfolds.

If you recall the two previous posts in this series, you remember that the structure of The Legend of Bagger Vance was taken from the Hindu scripture, the Bhagavad-Gita—and that the character of Bagger Vance is a parallel to that of Krishna, i.e. God in human form. Krishna obviously never uses the term “authentic swing” in the Gita, but every gem of spiritual wisdom that he utters is a variation on that premise.

Am I getting too heavy here? Are you still with me?

What Krishna says to Arjuna in the Gita is basically this:

You are who you are. It is folly to reject this identity, to flee from it or to try to alter it. Do you imagine that you, with your limited human capacity to grasp the ways of God … do you imagine that you possess wisdom and vision superior to all of nature, including the nature of the Almighty and the ultimate purpose of the universe? Stand up! Embrace your calling! Take the action that you know you must take!

In other words, your well-intentioned but misguided search for superior wisdom and justice has caused you to lose your Authentic Swing/Self. Trust me, says Krishna/Bagger Vance. Trust the true heart wisdom you have always possessed. Return to yourself and act.

[By the way, all this and more is in my book The Authentic Swing, Notes on the Writing of a First Novel, which is also part of this year’s Christmas Special.]