Today’s post will be the last in our series featuring lessons learned from a 20-year look-back at The Legend of Bagger Vance. Today is also the final day of our Black Irish Christmas Special. I will stop blabbing about it forever! 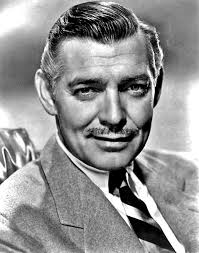 Clark Gable, the star. We, the writers, have to make him give a damn.

Write for a star. That had been a mantra of mine for at least ten years before Bagger. It’s a screenwriter’s axiom. But I never realized how true it was till my agent took the manuscript of Bagger “out to the town.”

The rights were snatched up within days. Almost immediately Robert Redford came aboard. He wanted to direct and to play the lead, Rannulph Junah. Eventually he decided that the role needed a younger actor. Matt Damon signed on.

This was no small thing for me, or for any writer. To write a character that two such A-list dudes want to play … that’s something. It cemented, for me, the concept of “writing for a star.”

Are you working on a novel or a screenplay? Who’s the protagonist? What kind of role is it? It’s an extremely powerful and revealing exercise to ask yourself (as I’ve done with every book and script since Bagger), “Would an A-list actor or actress want to play this part?”

Think about Fight Club. Is it any wonder that Brad Pitt wanted to play the role of Tyler Durden? How about Julia Roberts for Erin Brockovich? Anthony Hopkins as Hannibal Lecter? Jodie Foster as Clarice Starling?

Why did Matthew McConaughey want to play Mud in Mud—or Ron Woodroof in Dallas Buyers Club? Why did Reese Witherspoon option Wild? Did anyone have to talk Benedict Cumberbatch into playing the lead in The Imitation Game?

When you and I write for a star, we have to ask ourselves:

1. Is this role vivid? Memorable? Unforgettable?

2. Does the character drive the story? Is he or she “the straw that stirs the drink?”

3. Does he or she change? Is it a radical change? Does the character evolve in the face of adversity? How much adversity? (The more the better.)

4. Does the character want something desperately? Does he or she pursue this “to the end of the line?”

5. Does the character have internal contradictions? Is she complex? Does she act in unexpected ways?

6. Is the character a hero? Is he epic? Is he larger than life?

Sometimes we as writers will be tempted to tell our own story. We’ll write a central character who’s a thinly-veiled version of ourselves. This can be a trap. Because you and I are real people who live in the real world, we unconsciously and inevitably impose limitations on characters based upon ourselves.

You and I aren’t going to shoot someone. We’re not going to cut off our right arm or parachute into Kobani to fight ISIS. But the hero of our book or movie might have to.

It’s an enlightening exercise to pick a few A-list actors and actresses and see what roles they’ve chosen to play in recent years. Daniel Day-Lewis in Lincoln. Jennifer Lawrence in Silver Linings Playbook and A Winter’s Bone. Colin Firth in The King’s Speech. What kind of role would it take to attract Meryl Streep or Jeff Bridges or Robert Deniro or Hillary Swank?

Keep in mind how smart these talents are, how many difficult and different roles they’ve played already. Can we give them something that will challenge them? Can we write a part that they’ll be desperate to play?

Story counts. Structure is critical. Theme is all-important. But at the heart of it all is the protagonist, the hero. They’re our locomotive. We’ve got to give them something to play, something that will stretch them, something they can’t say no to.

We’ve gotta write for a star.