I’m just starting a new novel, trying to figure out the shape of the damn thing. Here’s a trick I use that might help you too. I call it the Clothesline Method. 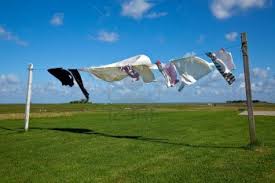 All you need is some clothes pins and your imagination

I think of the story as an old-fashioned clothesline, like people used to string up in their back yards to hang the laundry on. The left-hand end is the beginning of the story. The right-hand terminus is the end.

The line starts out empty.

Then you hang the shirts and towels and underwear (the scenes and sequences) on it.

I aim for between eight and twelve.

Sometimes I’ll actually draw a clothesline on a piece of paper (yellow foolscap, my fave) and sketch in a dozen or so squares hanging beneath.

What I love about this method is it’s simple and it’s dumb. It takes all the preciousness out of the process. And it eliminates a lot of the fear. How hard is it to hang a dozen dresses, sheets, and pairs of blue jeans on a line?

You can start with just one. Say you know the ending. Great. Hang that on the right-hand end of the line.

Maybe you’ve got one killer scene or sequence that you know goes somewhere in Act Two. Beautiful. Hang that in the middle of the line.

Let’s say you don’t know the beginning. No worries. Just pin a place-holder, however vague, to the left-hand side of the line.

Now you’ve actually got something.

I feel better already, just thinking about it.

The other great thing about the Clothesline Method is it identifies the gaps and forces you to fill them.

Sit still and stare at that gaping chasm between the killer scene in the middle and the final scene at the end. What’s missing? Trust me, you’ll come up with something. Sometimes just staring at that gap and applying common sense is all you need.

As an example, let’s take my favorite movie of the past couple of years, David O. Russell’s Silver Linings Playbook from the novel by Matthew Quick. Haven’t seen it? How can that be? It’s on at least four cable channels every night. I just watched it for the fifteenth time last night.

Let’s imagine we’re writing the original novel (or the movie as if it evolved from scratch). We know the climax, let’s assume, will be the dance contest and the wrap-up where Pat (Bradley Cooper) and Tiffany (Jennifer Lawrence) finally get together for keeps. That’s the bedsheet that we’ve hung at the far right-hand end of our Clothesline.

Let’s say too that we know the opening. Pat gets out of the mental hospital in Baltimore and returns to the home of his parents (Robert DeNiro and Jacki Weaver) in Philadelphia, determined to reconcile with his estranged wife, Nikki. Hang that at the left-hand end of the Clothesline.

See how the gaps start to fill themselves?

Clearly we need a scene, early on, where Pat meets Tiffany—and where we, the audience, sense these two are meant for each other.

Clearly we need some scene or sequence that gets them together to begin practicing for the dance contest.

Clearly we need several freak-out scenes along the way where Pat and Tiffany clash, inevitably over Pat’s obsession with Nikki, and nearly blow up their charming, true-love, nicely-evolving relationship.

As we hang each scene/sequence on the Clothesline, the gaps tell us where we need other set-ups, other twists, other turns in the story.

The Clothesline Method is a bit like the Foolscap Method, except it doesn’t worry about genre or theme or point of view or narrative device. It focuses entirely on actual scenes and sequences. It answers the question, “What happens?”

Like the Foolscap Method, the Clothesline Method’s great strength is it gives us confidence. By the time we’ve got six or seven scenes/sequences hung on the line, we’re beginning to really see the story. Yeah, we may be missing a few transitions and a handful of dramatic moments, but we can see the contour of the narrative. We can see that it’ll work.This is HUGE, as it fortifies us for the thousands of moments along the way when Resistance will rear its ugly head and tell us we’re losers, our story sucks, trash the whole stinkin’ mess.

It’s very helpful too, at least to me, that the Clothesline device is visual. It’s not just words on pages. It’s a graphic. It’s a schematic. We can see the whole thing at one glance.

As anyone who reads this blog knows, I’m a big believer in the Muse (or the Unconscious.) The gaps in the Clothesline, I believe, are prime fodder for the goddess. When she sees them, she goes to work. Next morning in the shower, an idea pops into our heads for filling the vacant space between the bath towel near the end of the clothesline and the pair of Oshkosh overalls in the middle.

And here’s the last, best part of the Clothesline Method: it’s free.

All you need is two imaginary hooks and one make-believe piece of line.