Have you ever come up with a killer scene—and nothing else? You find yourself with two or three minutes of incredible action, conflict, dialogue, but you have no idea where it goes or what the rest of book or movie might be. Arrrrgggh. Whaddaya do in a case like that? 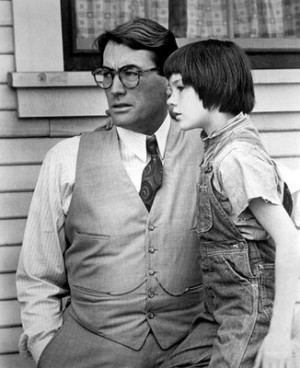 Gregory Peck and Mary Badham in Harper Lee's "To Kill A Mockingbird," screenplay by Horton Foote

I’m a believer that scenes are like holograms. Every one, no matter how brief or modest, contains the molecular blueprint of the wider project. It’s like a single cell, from which we can clone the entire Tyrannosaurus Rex. Let’s examine one.

I’m thinking of the Mad Dog scene from To Kill A Mockingbird. Do you remember it? It’s short. It’s not even technically a killer scene. But from that one strand of DNA we can extrapolate most of the movie if we do our detective work right.

It’s noon in a hot, sleepy Alabama town. Attorney Atticus Finch, wearing his necktie and three-piece suit, has been summoned home in an emergency by his housekeeper, Cal; he arrives in a car with his friend, the sheriff, Heck Tate. Neighbors are standing on their porches, pointing in alarm at something 100 yards away in the street.

Atticus’ young daughter Scout and son Jem have come out of the house, summoned by the alarm. All up and down the street, mothers and maids (all black) are catching their kids and pulling them back indoors. If that rabid dog bites you, you’re gonna die!

Heck has a rifle. Somebody’s gotta shoot that dog—and not from close up either; it’s too risky. Heck is the sheriff. Everybody’s waiting for him to draw a bead on that mad dog and put him away.

But Heck instead hands the rifle to Atticus. What? “Don’t give it to him,” says Scout of her own Dad. “He don’t know nothing about shootin’.”

“You hush up, girl. Don’t you know your Daddy’s the best shot in Maycomb County.”

Atticus is reluctant. He declares that he hasn’t picked up a firearm in years. You do it, Heck, you’re the sheriff. But Heck insists. We only got one shot. It’s gotta be Atticus that takes it.

As Scout and Jem look on skeptically, Atticus takes the rifle, fumbles a bit, squints through the sights, stops, takes off his eyeglasses, finally dropping them to the street. Come on, man! Do something!

Atticus summons his concentration. He sights. He squeezes the trigger. One shot: the dog drops dead. The whole street exhales in unison. The terrible danger is past.

Jem and Scout’s jaws drop. Both stare at their Dad with new-found respect. Atticus of course shrugs the whole performance off. He was just lucky, he says. Now stay away from the dog, he warns Jem. “He’s just as dangerous dead as alive.” Then he heads back to town to his law office.

Let’s take that scene apart and see what we can discover. Imagine that we’re Harper Lee and this is the ONLY SCENE we have in our mind. We’ve got nothing else. We haven’t written To Kill A Mockingbird yet. What can we unpack from this single scene? What can we use to build out the rest of the book?

First, we’ve got the world and the time of the story. The sleepy Alabama town, mid-1930s, where the streets are unpaved and life is so slow that people walk home from work to take their noonday meal, where neighbors know and depend upon one another. The Jim Crow era is vividly implicit in this scene as well, from the African-American maids who work for most of the families in this all-white neighborhood. Even Atticus has a housekeeper, the redoubtable Calpurnia. We have, as well, the element of nostalgia. The story is clearly a period piece, meaning the specifics of time and place will be standing in for a wider setting. We realize from this scene that the greater story, whatever it turns out to be, will be specifically American and timeless. The small-town, Depression-era South is a metaphor for all of the U.S., containing both the nation’s insularity, bigotry, and potential for evil as well as its simplicity (in the best sense), its integrity, and its basic decency and sense of honor.

Second, we’ve got the central figure of our story, Atticus Finch. Clearly he is our hero (if not our protagonist … that’s Scout.) He’s the personality around whom the whole book will revolve.

And we’ve got Atticus’s character. Who is this man? His name comes from Attica, the region of ancient Greece of which Athens was the principal city. So he is classic, he is democratic, he is a citizen of a community. More specifically he is the classic American hero. Modest, retiring, reluctant to push himself to the fore, yet capable and expert, even lethal, in the moment of truth. He is Gary Cooper, he’s Jimmy Stewart; he’s Tom Hanks as Capt. Miller in Saving Private Ryan. He’s the embodiment of the citizen-soldier of the Greatest Generation, the Western hero, the man who rises to extremes only when no other alternative obtains, who serves the community with great courage and effectiveness, then, once he has saved the day, retires without fanfare to his everyday life as a father, a breadwinner, a citizen.

Everything Atticus will do in the wider book/movie, both defending Tom Robinson, protecting his children from Bob Ewell, and being kind and understanding to Boo Radley, is prefigured in this scene.

Third, we’ve got our narrator and protagonist, Scout. We’ve got her character—the sweetly innocent but cheeky and outspoken tomboy, who’s keen and sharp and says exactly what’s on her mind.

And we’ve got the central relationship of the drama, that between father and daughter. The core of this dynamic is that Scout loves and adores her Dad, but possesses only a limited vision (as all kids) of the full spectrum of his capacities, his gifts, and his character. The story of To Kill A Mockingbird is, to me, about Scout realizing and beginning to appreciate who her father really is and, by extension, who all decent and courageous men and women are.

The unspoken story (the meta story) is that Scout will come to understand and honor and love her father fully only later, after the events of the story are long past, when she recalls them and narrates them as a grown woman.

The broader meta story that we, the readers, hold in our minds (and this is part of the aesthetic pleasure of reading the book or watching the movie) is that Scout is Harper Lee. She’s the author of the book. And that her capacity, evolution, and foundation as an artist derive directly from her relationship to her (real) father.

All of this is embedded in this single modest scene. That’s a lot.

What’s missing yet is the trial of Tom Robinson and the Boo Radley “B” story. Yet both are implied in the Mad Dog scene. We can’t say yet, from this scene alone, what challenge Atticus will have to face in the greater story, but we can be certain that it will be of a character with the challenge presented by the rabid dog—i.e., it will entail defense of the community, preservation of safety, etc.—and that Atticus will rise to the challenge in a specifically American way. He will assume the mantel of responsibility reluctantly; he may have to wipe his spectacles once or twice. But he will respond with courage, resourcefulness, and integrity in the face of extreme adversity. And his aim will be true. Already, from this single small scene, we have the foundation of at least two-thirds of the book.

Which brings us back to the first paragraph of this post. Whaddaya do when you’ve got one scene and one scene only? How do you know what the rest of the story is?

Answer: you dig. You put on your detective hat. You deduce and you extrapolate. You analyze every element the way you’d analyze a dream. What does the setting imply? The time period? Who’s the hero? What’s the theme? What challenge will the hero face? How will he respond to the challenge? What’s the central relationship? Who changes? How?

And you ask: Is there a meta story? Will we as readers come to realize, perhaps, that one character will go on with time to become the teller of the tale, and, by implication, assume the role of bearer and embodiment of the hero’s journey, not just in life but in art?