I’m writing this on Friday, March 23, having just read Shawn’s post from today, “The Second Draft (Is Not A Draft),” which I love and which I agree with 100%. I never see what Shawn or Callie write until it appears on the blog. I don’t show ’em my stuff early either. 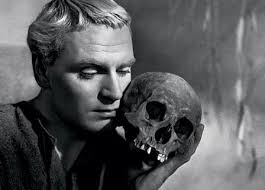 Olivier and friend in "Hamlet." Second drafts can scare the hell out of you.

Anyway I gotta chip in my two cents on the subject of second drafts.

To me, first drafts are like blitzkriegs. They’re like the Israeli army charging across the Sinai Peninsula in four days in 1967. Or our own First Marine Division rolling up to Baghdad from Kuwait in 2003.

The concept behind blitzkrieg is don’t look right, don’t look left, just keep charging forward. If you hit a place where the enemy is putting up strong resistance, don’t stop to slug it out with him. Go round his flank. Leave him where he is. Keep rolling forward.

The danger for the attacking force in such “wars of movement” is that those bypassed enemy forces will rise up and strike you. They may attack your exposed flanks or cut off your lines of supply. That’s the chance you take with blitzkrieg.

You’re betting that rapid movement and relentless forward momentum will carry your forces so deeply into enemy’s rear so fast that the foe will panic. Your advance will seem irresistible. It will acquire a perceived power greater than it actually possesses.

The other huge asset of a rapid forward thrust is that it fills your own troops with confidence. They own the initiative. They’re dictating the action. They’re acting, not reacting.

First drafts, to me, are like blitzkriegs. The aim is to get from PAGE ONE to THE END as fast as possible.

I don’t wanna give that bugger one milli-second to dig in or rally or counter-attack.

I want the enemy confused and reeling and I want my own guys brimming with confidence. Faster! Let’s roll!

And it works. I bypass all sticking points. I don’t stop to fight it out over a strategic bridge or crossroads. I find a way around and I keep going.

Get to the Suez Canal.

Ah, but what happens once we’ve reaching our objective?

We’ve seized the brass ring but we’ve still got a dozen enemy strong points behind us.

We have reached Draft Two. Exactly what Shawn was writing about in “The Second Draft (Is Not A Draft.)”

The second draft is going back and mopping up those hot spots and pockets of resistance.

They’re the scene where Hamlet goes into a four-minute soliloquy about  his indecision in picking the right necktie. The scene where Pierre and Natasha elope to Las Vegas.

Or they’re out-and-out holes in the story. No Hamlet indecision at all. No Pierre-Natasha romantic angst at all.

What Shawn means when he says second drafts are about using our left brain, our editor’s brain, and not our right/writer’s brain is that now we’re faced with concrete problems. Logic problems. Problems of architecture, of what we’ve put in that shouldn’t be in or what we’ve left out that has to be filled in.

As Shawn says, second drafts are not linear. We don’t go all the way back to Kuwait City and attack across the Iraq-Kuwait border again. Instead we go straight to the toughest pocket of resistance. Now we slug it out. Now we pay the piper that we didn’t pay before.

Second drafts are tough. The reason we bypassed those sticking points earlier is because they were hard. They presented problems that we didn’t want to face.

Now in Draft #2 we have to face them.

But here’s the good news (if you’ll forgive me for piling on with this military metaphor):

The good news is that the enemy troops who were so stoutly defending that bridge or crossroads before may have melted away in the interim. Who can blame them? They see our forces all the way north in Baghdad. The war is basically over. Why should they make some heroic stand here at the bridge at Nasiriyah when they’re just going to be surrounded and wiped out?

Since we’ve now written all five acts in Hamlet, it has become excruciating clear to us that the prince’s problem is indecision. Maybe that solo scene where the Melancholy Dane debates with himself about selecting the right necktie … maybe we should elevate the stakes a little. What if we put a dagger in his hand and had him turn the blade toward his own belly?

Second drafts are about going back and smoking out all those gremlins we bypassed in our headlong rush toward THE END.

What was that word that Shawn used?