One of the hardest things for a writer to do is to take criticism. Notes. That dreaded memo from your editor that says, “Back to Square One, baby.” 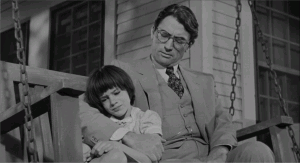 "Scout, remember that you can't make a work of fiction over until you've defeated your own demons of ego, fear, pride, and possessiveness."

So I must give major, major plaudits to Harper Lee for what she did (according to the stories we’re all reading in the Times and elsewhere) after turning in Go Set A Watchman to her editor Tay Hohoff at Lippincott in 1957.

The sensational aspect of the current Mockingbird/Watchman kerfuffle centers on Harper Lee’s radically different characterizations of Atticus Finch in the two books, specifically the less-than-knightly portrait in Go Set A Watchman. How could America’s avatar of decency turn into a racist? Why would Ms. Lee do that? Has the hero of To Kill A Mockingbird been tarnished forever?

To me, that’s not the story at all.

Since Watchman was written before Mockingbird (even though the time period in the book is later), Harper Lee did not “change” Atticus. The characterization in Watchman was the original. It was her first shot. It was Atticus 1.0.

The real story, if you ask me, is that Harper Lee rethought, reconceived, and reconfigured the Atticus of Watchman into the icon of honorableness that he became in To Kill A Mockingbird.

Think of that for a minute from a writer’s point of view. How hard is that to do? I can think of few things that are harder, not just from a practical point of view (the work, the recasting, the reimagining) but from a psychological perspective. How do you manage your emotions? How do you submerge your ego? How do you let go of expectations?

Somehow Harper Lee, God bless her, was able to do all that.

She set aside the manuscript of Watchman (the product of more than two years’ labor) when her editor Tay Hohoff declared it not ready for prime time—and went back to the drawing board.

I would give a lot of money to see Ms. Hohoff’s notes, or the correspondence between her and Ms. Lee, or to listen to a tape of their conversations over the two-plus years it took Ms. Lee to revamp the original story and turn it into To Kill A Mockingbird.

This much we know. Ms. Hohoff advised Ms. Lee to re-set the world of Watchman twenty years earlier. Take the character of Scout from a grown woman and wind her back to a little girl. Tell us the story, not through the eyes of a bitterly disillusioned daughter who had left Maycomb, Alabama and moved to New York City, but from the perspective of an innocent but whip-smart six- to nine-year-old tomboy, still at home, still in awe of her father.

Imagine doing that yourself. Could you? I’m not sure I could.

What guts. What imagination! The legend (I hope it’s true) says that Ms. Lee was so frustrated at one point in the process that she threw the whole manuscript out the window. Tay Hohoff, on the phone from New York, supposedly talked her into scrambling down to the yard and collecting the book, page by page.

Consider Harper Lee’s achievement from the point of view of Resistance.

We all know how formidable are the demons of self-sabotage. The dragon of Resistance must have been blasting Ms. Lee with the force of a flame thrower.

What, change the time period? Move the whole damn thing back twenty years? Make Scout a six-year-old? Reimagine Atticus? Make the trial of Tom Robinson (only a side-note in Watchman) into the centerpiece of the revised tale?

Recreate the character of Jem (who had already died by the time of Watchman)?

Over the years Shawn has told me, from his own experiences as an editor, a number of Writer Destroying Herself horror stories. My blood runs cold each time I hear one because they’re so relatable. So I’ve Been There. So easy to see oneself succumbing to the identical impulses of pride, fear, and self-destruction.

In Shawn’s stories, he’s usually working with a talented young writer. One year. Two years. They block out a novel together. Or, like Tay Hohoff with Harper Lee, the writer submits the completed novel and Shawn takes him or her under his editorial wing. He suggests story changes.

The tragedy? The writer revolts. She assumes a posture of high dudgeon.

She refuses to make the changes.

I’ve done it myself.

The story I’d love to hear is of Harper Lee’s two years reworking Watchman into Mockingbird.

That’s called being a pro. That’s being an artist.

To set aside your ego. To give credence to the opinions of another. To digest and absorb your editor’s suggestions, pass them through your own artistic gut, your temperament, your instincts. To incorporate them. To make them your own. Reject some? You bet. Turn others upside-down? Damn right.

But in the end to listen. To heed. To own the greatness of heart to allow another person to contribute, to help shape your vision.

And what, in the end, came out of that lonely, balls-of-steel process? Nothing but Atticus Finch 2.0 and one of the most beloved novels and characters of the twentieth century (not to mention the characters of Jem, Boo Radley, and young Scout herself.)

In his review in the L.A. Times, David Ulin calls Go Set A Watchman less a novel than a “literary artifact.”

That sounds true to me, and I see nothing wrong with that. If Watchman is an artifact, it’s one all of us should study. To quote Ulin again,

How did Lee take the frame of this fiction and collapse it to create To Kill A Mockingbird, finding a narrative fluency only hinted at within this draft? How did she refine her language, her scene construction, discover a way to enlarge what are here little more than political and social commonplaces, to expose a universal human core?

How did she do it? That secret is Harper Lee’s alone. But whatever personal and artistic transformation she willed herself to undergo, it’s the same one you and I must navigate if we want to become real writers and deliver our visions, not in half-baked and premature form (or worse, blow them up because we refuse to alter our original vision), but in their full power and completeness.

Thanks, Harper Lee, for listening to your editor.

Thanks for biting the bullet.

Thanks for showing us how a real artist works.