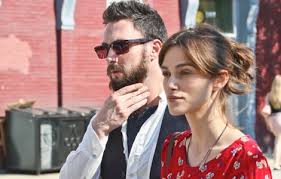 “Every skin flick makes the same mistake,” said the producer (who was a thoroughly nice guy, like a suburban soccer dad). “When the movie gets to a sex scene, the story stops dead in its tracks. That’s my first marching order to you, kid: keep the story going through the skin scenes. Make something happen, so we’re not just sitting there watching people screw.”

His second guideline was a corollary of the first. “Always have some separate but related action going on during the sex scenes. If the wife and the pool boy are having sex in the bedroom, throw in something like the husband unexpectedly returning home and walking in the front door. That way we can cut back and forth between the husband and the-wife-and-the-pool-boy and generate suspense. See what I mean? The story doesn’t stop. It stays interesting.”

Keep the story moving even during the action sequences.

Don’t let the movie grind to a halt while we watch Gene Hackman punch out a drug dealer or Steven Seagal chase bad guys down a city street.

I bring this up because I saw a great scene in a movie the other night that I’d like to unpack here today in some detail. The scene brilliantly employed the two principles cited above.

Let’s get into it.

The film was Begin Again starring Keira Knightley and Mark Ruffalo. Begin Again is from writer-director John Carney, who also did the terrific indie flick Once.

Begin Again is a musical. Not in the Rodgers & Hammerstein sense, where each song overtly carries its share of the story-telling, but more like a record album, where each tune is its own piece and may or may not have anything to do with the story.

I’m sure John Carney was excruciatingly aware of this as he was structuring the screenplay. “How,” he was asking himself, “can I make each song work and keep the narrative moving at the same time?”

Here’s the scene I want to tell you about:

Keira Knightley and Adam Levine (of the band Maroon 5 in real life) are boyfriend and girlfriend in the movie. They’re both songwriters and singers. Adam has been out of town for a week. The scene starts with him returning home, to the New York loft he and Keira share.

Kiss kiss, welcome home. It’s evening, do you want some wine? Can I play you a song, Adam asks Keira, that I wrote while I was gone? Yes yes, say Keira. She adores Adam, she wants to support his career—and she loves his music, she wants to hear this new tune. Adam plugs his iPhone into the loft’s sound system, the song comes on, Keira listens.

The story could come to a screeching halt here if this scene had been clumsily conceived. Instead here’s what happens:

The song starts. Adam brings glasses of wine for himself and Keira. They’re standing across from each other at the counter in the kitchen.

But for some reason, Adam’s eyes are lowered. He can’t seem to raise his gaze to meet Keira’s.

With effort, Adam meets Keira’s eyes. But he immediately lowers his gaze again.

Keira’s expression becomes grim. Her jaw sets. She searches Adam’s face as if seeking confirmation of something.

He raises his glance to meet hers.

Suddenly she slaps him furiously across the face.

Adam reels from the blow. “What the f*#k’s the matter with you?” He storms from the kitchen, slinging his wine glass shattering into the sink.

Keira stalks to the iPhone and pulls the plug.

Clearly Keira has intuited something dire from some subtle (to us) cues within her boyfriend’s song.

Adam returns sheepishly. “What are you, a mind reader?” 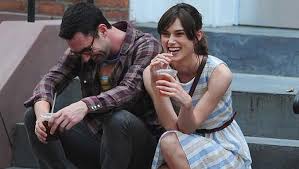 Yes, but can she trust him?

The tail of the scene reveals that Adam has had an affair while he was out of town. He’s in love with another woman.

The scene ends with Keira, heartbroken, packing her stuff and bolting.

Keep in mind that the lyrics of Adam’s song contain nothing overt, no reference whatever to the fact that he is cheating on Keira. It’s just a nice upbeat love song.

That’s what I mean by “making a scene cut two ways.” It can’t be done with every scene. But when we can make it work, it’s dynamite.

In this scene in Begin Again, writer-director John Carney took a song whose lyrics were by no means overtly related to the plot, and made it not only advance the story but turn it dramatically.

Consider this scene through the prism of positive/negative that Shawn defines in The Story Grid.

The scene’s charge starts totally positive. The lovers are together. It ends on a flat-out negative. Keira and Adam have broken apart.

(And this break-up, along with the built-in subtextual question Will They Get Back Together?, powers a huge part of the rest of the movie.)

Not only that, but Keira’s character is shown by her actions in this scene to be 1) keenly intuitive, 2) totally plugged in to what makes her boyfriend Adam tick, and 3) a woman of action, pride, and conviction, who won’t take this kind of stuff from anybody.

All from a song that had nothing whatsoever to do with the plot of the movie.