This post goes out with thanks to my friend Derick, who taught me a type of Resistance I had never thought of (or at least had never given a name to.) 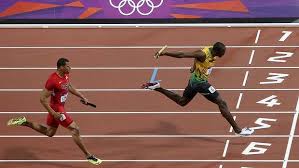 Usain Bolt. Resistance is always strongest at the finish line.

Derick had been working for months on two big projects of his own. He was getting really close to the finish of both, when all of a sudden job offers started coming in. He was offered a teaching post. A movie wanted him to come on board. Two other plum positions opened up, begging him to join.

Guess what happened to his two big projects.

A month later Derick and I were talking. “I let ‘em both drop,” he said, cursing himself. “Then I realized what I was doing. I was adding steps between almost-finished and actually-finished.”

Isn’t it strange, too, how the universe steps in to screw us up? The rule of thumb for the finish of projects is, “Resistance is always strongest at the finish line.” Somehow that diabolical force can even produce job offers and “opportunities” at just the right time to knock us off course.

The more I thought about it, the more I realized that this type of thing happened to me too. Or I should say, “I let it happen.” I accepted a research position once that I had no interest in. I’ve signed up for movies that had nothing to do with my vision for myself. Right at the finish of Something Big of my own. Arrrgggh.

My first literary agent, many years ago, was a gentleman named Bart Fles. Bart was over ninety when he started representing me and very wise in the ways of the lit biz. He used to ask me, as I approached the end of a manuscript, “How close are you to finishing?”

“Close is good enough,” Bart would say. “Give it to me now.”

I didn’t appreciate it at the time, but now I see how wise Bart was. He knew from decades of representing crazy writers (and what writer is not crazy?) that, as they neared the finish line, they’d inevitably begin tweaking and retweaking, doodling and noodling, and, in Derick Tsai’s phrase, adding steps.

Delivering late could be fatal. That perfect editor that Bart had been priming for months … she might move to another job, acquire a book similar to ours, get married and take off on her honeymoon. Anything could happen. We could torpedo the whole submission.

How much better, Bart knew, to get a manuscript in to an editor (even if it wasn’t 100% perfect) on October 20, when the publishing business was still functioning, than on December 10th, when everyone in the business had mentally checked out for the Holidays.

To be clear, I’m not lobbying for turning in sloppy work. When we ship, we better ship a product that works. But there’s a big difference between pro-level and super-duper-perfect.

Take a lesson from Derick and don’t let Resistance trick you.

When you’re close, push hard and get it done.