We’ve been talking for the past couple of weeks about first drafts. Bottom line message: Get through them fast and with aggression, even if the final product is imperfect and riddled with TKs (placeholder scenes, descriptions, and dialogue). In other words, “Cover the Canvas.” 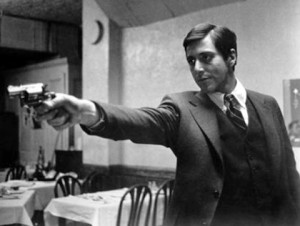 Al Pacino knocks ’em dead in “The Godfather.” Before we start, we wanna be sure we’ve got a couple of scenes this good.

But what do we do before we cover the canvas?

Plunge in blindly? Start writing from Page One?

I’m gonna take the next few weeks to address these questions. What I have to say is purely my own idiosyncratic thinking and experience.

Before I start a first draft I lay out three files, to which I give the following titles:

I also start a file called “Theme” and three more titled “Hero,” “Villain,” and “Payoff.” (And a few more that I’ll get into as we go along.)

Why am I doing this? I’m trying to get the story straight in my mind from CHAPTER ONE to THE END. I want a snapshot, a blueprint I can refer to. I’m asking myself, “Is this a good idea? Will anyone want to read this? Is it about something? Does it possess dramatic horsepower? Does it progress from A to Z? Does it pay off in the climax? Do I love it? Can I spend the next two or three years working on it?”

I won’t start the first draft till I can say yes to all those questions (and to a lot of others.)

I won’t start until I can “see the whole movie.”

Did I always work like this? No. For years I dove in on Page One, put my head down and started hammering keys. That’s not always a bad idea. Sometimes it works. But what usually happened for me was I’d get halfway through before it hit me that I was totally lost. Or I’d finish completely only to realize that I basically had to tear the whole house down and start over.

Working in Hollywood taught me to plan ahead. “Screenplays are structure,” William Goldman famously declared. I learned from writing movie scripts to pin sixty index cards to the wall, one for each scene, and to not type a word onto paper till I had those 3X5 cards all working and all in order.

I carry over that same thinking to novels, even though I know from experience that a long-form narrative will morph and evolve wildly over the two or three years it takes to complete it. “It wouldn’t be a plan,” they say in the Marine Corps, “if it didn’t change.”

In the next few weeks I’m gonna get into detail about “Foolscap,” “3Acts,” and “60Scenes.” But for today let’s start with another lesson from the movie biz: Paul Schrader’s theory of pitching.

Paul Schrader is the writer of Taxi Driver and Raging Bull and the director of eighteen movies including Light Sleeper, Affliction, and 2013’s The Canyons. Here’s what he wrote about pitching:

Paul Schrader was talking (I think) about condensing for presentation a project that was already complete, at least in his mind. He was boiling it down to its pitchable essentials.

I use his technique the opposite way. I ask those questions at the very start, to test my new idea, to see if it might work. In other words, I ask myself Paul Schrader’s questions before I start a first draft.

Do I have a “strong early scene,” i.e. an Inciting Incident?

Does my story have a spine? Can I see a six-lane freeway propelling it from beginning to end?

Do I have at least a few killer scenes? Do I have Michael Corleone gunning down Virgil Sollozzo and Capt. McCluskey at Louis’ restaurant in the Bronx? Do I have the Indominus Rex breaking free and terrorizing thousands at Jurassic World?

Do I have a hero who evolves powerfully from the story’s start to its finish?

And have I got a gangbusters climax? Do Harry and Sally finally get together? Does Matt Damon get back safely from Mars? Does Jay Gatsby’s West Egg mansion devolve into a tragic ruin?

When I can say yes to all these, I’m ready to start putting together a formal Foolscap and to start thinking about “3Acts” and “60Scenes.”

We’re still a long way from “Just Write the Damn Thing!” But we’re getting closer. More on this next week.