A Man With a Code

Call this post “Dudeology #3,” as we continue our exploration of The Big Lebowski, with an eye specifically to the writing of first drafts. 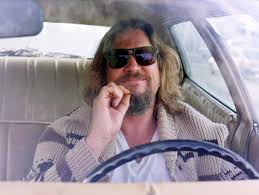 A Dude with a Code

We were talking in a couple of previous posts about the preparatory questions a writer asks himself or herself before the first word of a first draft goes onto paper. For me, the first two are:

The third question for me is, “What’s the theme? What is my story about?”

Which brings us back to the Dude.

I have no idea what Lebowski’s creators, Joel and Ethan Coen, would say their theme is. My own take may be wildly different from theirs. But here’s my shot:

Never underestimate a man with a code.

The Dude, though it might not seem like it on first viewing, is a man with a code. A code of honor. In that, he’s just like Philip Marlowe or Sam Spade or Jake Gittes (since Lebowski’s genre-DNA is, way more than fifty percent, that of a Private Eye Story.)

Here’s Raymond Chandler on the subject from The Simple Art of Murder (1944):

“Down these mean streets a man must go who is not himself mean, who is neither tarnished nor afraid. The detective in this kind of story must be such a man. He is the hero; he is everything. He must be a complete man and a common man and yet an unusual man. He must be, to use a rather weathered phrase, a man of honor.”

I know The Big Lebowski is hysterically funny, and the Dude is one of the outstanding comic creations of the past couple of decades. But comedies, more even than more “serious” fare, must be seated in solid dramatic soil.

Consider the Dude’s character as a man with a code.

The Dude is kind. He’s capable of empathy for others (his demented landlord, the kidnapped Bunny, Maude the troubled daughter, even the Big Lebowski himself). He believes in justice. Someone stole his carpet; he wants it returned intact. (“It tied the whole room together, man!”) He lost the money entrusted to him; he feels an obligation to get it back. Despite his buddy John Goodman’s non-stop provocations to act unscrupulously (“A toe? I can get you a toe, Dude!”), the Dude remains honorable and relentless. He’s on the case. And his code is what sees him through to the end.

Even the Dude’s past, like Bogie’s in Casablanca, is replete with hints to his integrity.

I was one of the authors of the Port Huron statement. The first draft … not the compromised second. Remember the Seattle Seven? That was me.

Okay. How does this help you and me as we embark on the first draft of our new novel/screenplay/videogame/whatever?

Consider, on this subject, our hero’s name.

“The Dude” is not just Jeffrey Lebowski’s moniker, it’s his identity as the filmmakers intend it. “Dude” is the generic term for a male in a certain American culture. We greet friends with “Hey, dude!” “Dude” is the equivalent of “guy” or “man.”

In other words, the Dude is Everyman.

Which brings us back to the idea of a Man With A Code.

In many ways, this conception is the pre-eminent theme in American books and movies. The archetypal American hero from George Washington to Davy Crockett to Atticus Finch is a man with a code.

Pick a hero in any Western.

In any cop story or detective story.

They will always be men (or women) with a code.

Isn’t this idea, in fact, the central identity (or self-identity) of the United States? Isn’t that how we see ourselves, as individuals and as a nation?

Yeah, we may be fat and lazy. We may pursue our creature comforts a little too zealously. We may be shallow, we may be ill-informed; we may have our priorities all screwed up.

But down deep we believe in right and wrong and if you push us far enough, we’ll actually act on these beliefs.

The Coen brothers played this idea back to us in a zany, stoned (“Look out, man! There’s a beverage here!”) vodka-Kahlua-and-cream way. But the underlying theme was dead serious and the story was as red-white-and-blue as Bogie and Bacall and as American as apple pie.