The Spine of the Story

Here we are, getting set to plunge in on our first draft. 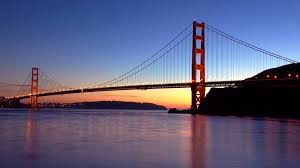 The Golden Gate bridge. Our story’s spine should be as simple and as strong as this.

But what do we do before that?

We said a couple of weeks ago that our first question to ourselves, pre-pre-first draft, should be:

Okay, great. Let’s say that we’ve done that. We know our genre. Our story, we’ve determined, is a sci-fi action-adventure. Or maybe it’s a love story. Or a Western combined with a supernatural thriller.

Good enough. We’ve got that covered.

Let’s call that our second question to ourselves.

“What is our story’s spine?”

(Myself, I think of this in slightly different terms. I think of it as “Beginning, Middle, End.” “Act One, Act Two, Act Three.” “Hook, Build, Payoff.“)

No worries, it’s all the same thing. We’re asking ourselves “What’s the backbone of our story? What narrative architecture supports our tale from beginning to end?”

For our purposes now [pre-pre-first draft], this doesn’t have to be much. It can be as simple as this:

Ahab sets out after Moby Dick. Ahab chases Moby Dick around the globe. Ahab catches up with Moby Dick and fights him to the death.

Why can this part of our pre-pre-first draft (our Foolscap file) be so simple? Because all we really need to assure ourselves of at this stage is, “Will this idea work as a story? Does it have a beginning, a middle and an end? Does it go somewhere? If we can write enough strong scenes adhering to this narrative spine, will a reader be hooked at the start, have her interest held through the middle, and feel satisfied emotionally and intellectually at the end?”

That’s the job of the story’s spine.

If we can answer yes to all the questions above, that’s all we need at this point.

The Terminator comes back from the Skynet machines-versus-humans future to kill Sara Conner (who will be the mother of John Conner, the brilliant rebel leader who will fight Skynet in the future). Sara Conner and Reese (a fighter sent back in time by the embattled rebels in the future) flee from the Terminator as they themselves fall in love and plant the seeds of John Conner. Sara and Reese battle the Terminator to the death and, for the moment at least, defeat him.

That’s a great spine, a strong and sturdy Act One, Act Two, Act Three. If we’ve got that much at this early stage, we are doing great.

Our pre-pre first draft now has established answers to two questions. One, “What’s the genre?” And two, “What’s the story’s spine?”

We can feel very good about ourselves because we’re working as professionals and not as amateurs. We’re laying the groundwork for what is to come—the stable, strong foundation of the edifice. We are setting ourselves up to succeed and not to fail.

“What’s the story’s theme? What is it about?”