Let There be Blood

I know I keep promising to finish with these “Reports from the Trenches.” But I’m still deeply in the muck and mire myself, and each week brings a fresh insight.

This week’s flash is about blood ties. 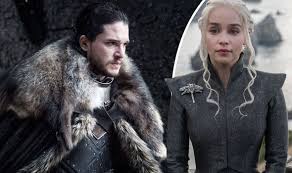 Jon Snow and Daenerys Targaryen. How tightly can the writers bind these two characters?

I first learned this trick from a wonderful book called Writing the Blockbuster Novel by Albert Zuckerman. Mr. Zuckerman is Ken Follett’s literary agent and something of a legend in the business. Blockbuster can be heavy going because it presents its case in such detail, but I recommend it highly nonetheless.

Here’s one of the book’s brilliant insights:

Tie your characters as tightly together as possible.

What do Zuckerman/Follett mean by this?

If Luke must duel Darth Vader to the death, make them scion and patriarch. And don’t forget Princess Leia. Throw her into the gene pool too.

If you can’t bind your characters within the family web, make them lovers.

Laertes should be Hamlet’s best buddy, and Ophelia should be Laertes’ sister, and Polonius his father. If Hamlet’s mom, the queen, is gonna murder his dad and marry the usurper, let that dastard be Hamlet’s father’s brother.

Game of Thrones works this magic every week.

I’m not a geek for the show (I can’t really tell Daenerys from Cersei or Sansa Stark from Arya), but I know that 99% of GOT’s dramatic power comes from the fact that everybody is related to everybody else. Even the dragons were raised from eggs. They’re members of the family too.

The Godfather gave us blood ties across three generations.

Even Breaking Bad, whose central family was bound primarily by the secrets each member was keeping from every other, was about teacher-student bonds, fellow-criminal bonds, etc.

Which brings me back to this Report from the Trenches.

When our novel crashes and we’re desperately seeking to unearth the core story beneath, Albert Z’s trick can help us disinter that elusive sucker.

Three days ago I took a male and female character who had been unrelated and made them brother and sister.

Wow, did that help!

If you can’t make your characters related by blood, it can be almost as good to give them shared backstories.

Paul Manafort was a partner in Black, Manafort and Stone, powerful Washington lobbyists who represented numerous overseas clients. The Stone in that trio is Roger Stone, the agent provocateur and long-time pal of Donald Trump. Stone’s mentor was Roy Cohn, who was Joseph McCarthy’s chief counsel in the Army-McCarthy hearings. Cohn also mentored the young Donald Trump.

See what I mean?

Tie your characters together.

Give them intertwined roots.

For the reader, the fun of the story is unraveling these hidden links.