How can we resuscitate our story after it crashes?

This is no easy issue, as all of us know. It feels to me, being in the middle of the process right now, like I’m grabbing my story by the belt, turning it upside-down and shaking it till all the loose change tumbles out of its pockets.

We’re trying to get our story to give up its secrets.

To spill its guts.

Here’s a trick that sometimes works:

Bring the story back to where it started.

In other words, circle back at the end to a character from the beginning. Or a setting. Or a mood or a phrase or a thought.

Remember the opening of Chinatown? Jack Nicholson as private eye Jake Gittes is meeting in his office with a client named Curly (Burt Young), who happens to be a skipjack fisherman working out of San Pedro. Jake shows Curly surveillance photos of Curly’s wife, cheating with another man. Curly breaks down, clutching in tears at Jake’s window blinds.

Curly, go easy on the Venetian blinds, will ya?. I just had ’em

The scene ends with Curly apologizing to Jake for not being able to pay his bill. Curly exits. We think the scene’s purpose was just to introduce Jake and his world as an L.A. private detective.

Cut to the movie’s final reel. Jake is now trying to save another client, the glamorous but desperately troubled Evelyn Mulwray (Faye Dunaway) and her daughter Katherine from the clutches of her dastardly father, Noah Cross (John Huston.)

To whom does Jake turn for help?

(We have not seen Curly in the movie at all since that opening scene.)

To settle his arrears with Jake, Curly agrees to take Evelyn and Katherine aboard his fishing boat and help them flee by sea to Ensenada. The attempt ends in tragedy of course, but the circling back of the story from Curly-at-the-start to Curly-at-the-finish is a nice piece of (almost) closure.

And this doubling-back maintains the movie’s image system of water (the dam, the dry L.A. River, the Oak Pass Reservoir where Hollis Mulwray is drowned and Jake almost loses his nose, et cetera et cetera around the villain Noah Cross’s corrupt scheme of bringing irrigation water to Los Angeles toward the end of making it into a world-class city.)

In Walker Percy’s The Moviegoer (winner of the National Book Award for Fiction in 1962 and one of my all-time faves), the protagonist and narrator Binx Bolling describes this same doubling-back phenomenon from a different and very interesting perspective:

A repetition is the re-enactment of past experience toward the end of isolating the time segment which has lapsed in order that it, the lapsed time, can be savored of itself and without the usual adulteration of events that clog time like peanuts in brittle.

Binx loves movies. He observes than when he sees an old film, say, twenty years after he saw it in its original release, the interval of time between the viewings becomes unified and heightened.

That’s what happens to our readers, yours and mine, if we can pull off this trick in our stories.

At the risk of becoming long-winded, consider the following hypothetical:

You and I are writing a book about King Arthur. 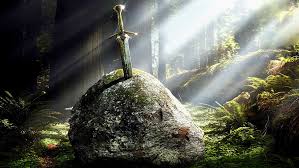 Excalibur in the Stone. Is there some way we can circle back to this?

Early on, we have the scene of the young Arthur drawing the sword from the stone. Great scene. Destiny. The idea of “the chosen one,” etc.

Now, four hundred pages later, we’ve reached the part where Arthur’s kingship has turned sterile and empty. Lancelot has betrayed him. Guinevere has proved untrue. The Round Table has fallen apart.

Arthur, in despair, accompanied by only a handful of his last royal retainers, trudges through a dark wood in winter.

Is there some way we can “double back?” Can we somehow return to some scene or moment or character that went before—and thereby re-energize our story?

Arthur and his men enter a clearing. The sun is setting. A cold wind rips through the forest. The prospect of an endless, bitterly cold night looms. Suddenly …

Arthur senses something familiar in the clearing.

OMG, this is the site of the Stone!

The stone from which Arthur drew the sword so many years ago.

The place looks terrible. Gone to seed, overgrown, neglected. But this is the place, all right.

See what I mean? We can play this scene five different ways and every one of them works.

The doubling back of Stone Then to Stone Now creates a “repetition,” within whose spell the intervening years cohere, for good or ill. And from that cohesion can arise insight, a twist in the story, a fresh resolve.

Suppose, in our Arthur story, the despondent king steps to the Stone, hoping for some flash of magic.

But the Stone is silent.

We have reached our hero’s All Is Lost moment.

Perhaps Arthur, from the depths of despair, senses that his challenge is to keep on struggling for the good and the true even in the absence of destiny, with no support except that which he can generate from his own resources.

In fact it turns the whole story.

And we, the writers, got to it by using a trick.

We asked ourselves, “How can I double back and make the story circle around to some place or moment or character from which it began?”

[I tried this, by the way, in the book I’m wrestling with now. It didn’t work. I couldn’t find a ‘double-back’ that made sense.

[That’s okay too. Not every trick works every time.

[Perhaps my destiny is to struggle on, supported only by my own resources.

[Or perhaps the Stone retains its magic, subtly nudging me to that seemingly hard but actually liberating and empowering Epiphanal Moment.]