Everybody Loves the Bad Guy

The Bible is loaded with spectacular villains, as are all cultural myths from the Mahabharata to the Epic of Gilgamesh to the saga of Siegfried. 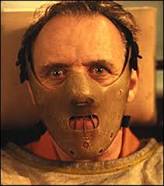 Is he the greatest villain ever?

Great villains eclipse even the heroes who vanquish them.

Flash Gordon was a pale shadow alongside Ming the Merciless.

Clarice Starling was cool, but who could forget Hannibal Lecter?

The villain not only steals Paradise Lost but walks off with the most unforgettable line.

Better to reign in hell than serve in heaven.

Film directors relish villains because villains light up the screen. Actors love to play Bad Guys. What onscreen outrage could be more memorable than crushing a half-grapefruit into your wife’s face, as James Cagney did to Mae Clark in Public Enemy, or, as Richard Widmark’s unforgettable act of villainy in Kiss of Death, pushing an old lady in a wheelchair down a flight of stairs?

Wait, what about this guy?

James Bond always goes up against diabolical villains, as do Superman, Batman, Spiderman and Iron Man. How many franchises (Alien, Terminator, Jaws, Predator) are driven not by heroes but by villains?

The more years I labor in the storytelling racket, the more I appreciate the value of a great antagonist.

For you and me as writers, our bad guys may be more important even than our heroes.

[For the next few weeks we’re going to return to our series on Bad Guys, which we started a while ago and then moved off from for our “Reports from the Trenches.” More on villains next week.]