There’s an axiom among screenwriters:

Start at the end.

What they mean is, “Figure out your climax first (Ripley blasts the Alien into outer space; Moby Dick takes Ahab down to the depths), then work backwards to figure out what you need to make this climax work. 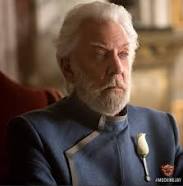 Don’t you hate this guy? (Even Donald Sutherland hates this guy.)

I’m a big believer in this way of working—and its corollary:

Once we’ve got Anton Chighur (Javier Bardem in the movie), we’ve got No Country for Old Men licked. Once we’ve got Hannibal Lecter, we’re halfway home in The Silence of the Lambs.

It’s natural to want to start at the beginning and start with the hero. Let’s introduce Raskolnikov, we tell ourselves. Let’s intro Huck Finn. But all too often, this way of working runs out of gas halfway into Act Two. We find ourselves asking, “What did I think this story was about? Where were we going with this?”

Answer: identify the villain, then regroup around this axis.

In The Hunger Games, the villain is the corrupt, soulless “system,” embodied by Coriolanus Snow (Donald Sutherland), the commander of Panem.

Let’s start with him.

Pin his picture to the wall.

Place his index card above all our scenes and sequences.

Bad Guy Snow tells us what our heroes (even if we haven’t conceived them yet) must believe in, how they must act, what temptations they must face, and by what means they must fight him and overcome.

Whoever Snow is, our Good Guys are the opposite.

Whatever Snow stands for, our heroes stand for its antithesis.

When we start with the villain, we have a leg up on our climax as well (again, even if—especially if—we don’t know yet what that climax is.)

How does knowing our villain help? Because

In the climax, our hero has to face Doc Ock, Immortan Joe, Bane, the Alien, the Predator, the Terminator.

When we get our villain straight in our mind—when we know who he is, what he wants, what his powers and vulnerabilities are—we are working from firm, solid ground when he attack every other part of the story.