How Steven Spielberg Handles his Villains

Steven Spielberg loves to tease us with his villains. 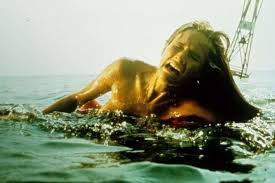 He shows them only indirectly.

In the audience we see the effects of the Bad Guys’ actions, but we rarely see the malefactors themselves.

This is tremendously powerful because it makes us imagine what the forces of evil look like, and that’s always scarier than actually seeing them in blinding daylight.

Remember the scene in Jaws with the three yellow barrels? Our heroes in their boat (Richard Dreyfuss, Roy Scheider, and Robert Shaw) harpoon the shark with cables linked to three huge yellow air-tank-like barrels. The barrels float on the ocean surface, enabling our hunters (and us) to see the shark’s movements from the boat even when the finned menace is submerged.

The great cinematic moment is when the three barrels go churning across the surface at high speed toward the boat, then dive under and come up on the other side.

We never see the shark.

But wow, how we imagine him.

That dude, we can’t help but say to ourselves, must be HUGE!

Likewise Spielberg doesn’t really show us the Meanies pursuing E.T. We see only their flashlight beams searching for the little guy, or their keys jangling on their work belts as they close in on him.

The giant spaceship wasn’t really the villain in Close Encounters but it felt like at least an ominous, unknown force at the start. Again, Spielberg withheld for most of the movie all direct sight of this entity.

We saw headlights and amber lights behind Richard Dreyfuss’s pickup truck. We saw screws mysteriously jiggling out of their sockets on Melinda Dillon’s floor and crazy lights flashing under her door jamb. The whole house shook. Electric toy cars began scooting across the floor. Melinda’s little son became mesmerized by the lights appearing outside. 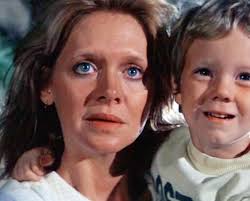 But we never saw the space ship.

Ridley Scott worked the same magic in the original Alien. We saw the nasty little bugger (the Alien, not Mr. Scott) burst out of John Hurt’s chest and flee into the darkness of the huge space vessel. But after that, the scares all came from shadows and images on search screens, mixed with the odd Holy Crap pop-up of the monster, followed by an instantaneous cut-away.

You and I could profit by stealing this trick from these great scare-meisters.

Keep the villain present and aggressive in the effects he produces, but show him overtly as little as possible.