“I believe in America. America has made my fortune. And I raised my daughter in the American fashion … “

These are the opening lines of The Godfather. They’re spoken in extreme closeup by the undertaker Bonasera in a heavy Italian accent. Bonasera speaks out of deep shadow. He recounts with painful emotion how his beautiful young daughter, defending her honor, was brutally beaten by two young men, “not Italians,” whom the American courts subsequently let go free. 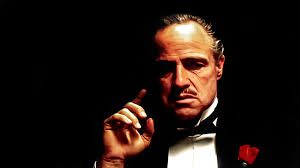 Marlon Brando as Don Corleone in “The Godfather”

The camera slowly pulls back as Bonasera relates his daughter’s woe, until the frame has widened enough that we begin to see the back of another man’s head. Bonasera is speaking to this man. The man is, of course, Don Corleone (Marlon Brando), the Godfather.

Bonasera asks the Godfather for “justice,” i.e. bloody vengeance on the young men who ruined his daughter.

Let’s continue our series on Opening and Closing Images.

The key scene in the Wedding Sequence for me is between Michael and Kay. Every other member of the Corleone family is “in character” in this sequence. They’re all Mafia-related in one way or another. Except Michael. He’s in the uniform of a U.S. Marine captain. He’s clean-cut. The most “American” of all the characters. And Kay is Mayflower-American. She stands out as an outsider in this traditional Italian wedding.

In the scene, Michael tells Kay the story of how his father, the Don, assisted by his enforcer Luca Brasi, got his godson the singer Johnny Fontaine (Al Martino, patterned after the real-life Frank Sinatra) out of a contract with a big bandleader. This is the first of the famous “I’ll make him an offer he can’t refuse” moments. The Don and Luca presented the bandleader with a contract releasing Johnny.

that either his brains or his signature would be on the contract.

Kay is taken aback. She can’t believe her clean-cut war-hero boyfriend is part of this.

That’s the In of The Godfather for me—the Bonasera scene and the Michael and Kay scene. 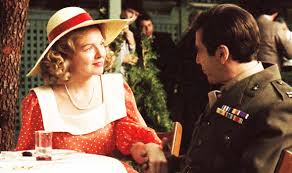 These moments introduce a number of intersecting themes.

One, the idea that the Corleone family (and other Italians like Bonasera) are immigrants and thus not accepted fully as Americans. In other words, this will be a story about a society within a society.

Two, the idea that the Corleone family wants to be fully American. Michael is the character, at least in the opening sequence, who carries this aspiration—witness his Marine Corps identity, his super-WASP girlfriend, etc.

Three, the idea that the greater American society is more corrupt than the Italian mafia society-within-the-society. In other words, we’ll find ourselves rooting for the Corleones against the crooked American cops, politicians, etc.

Now let’s consider the Out, the Closing Image of The Godfather.

Remember our rules for In and Out Club:

The Closing Image must resonate with the Opening Image. It must look as much like it, or have as many echoes of it, as possible.

But at the same time (second rule of In and Out Club):

The Closing Image must be as far away from the Opening, emotionally and narratively, as possible—to show how much the hero has changed.

The Closing Image of the Godfather is a short and highly concentrated one. It has almost no dialogue. It’s virtually all visual.

The scene takes place in the same room where we originally met Bonasera—the Godfather’s office in the Corleone house. Only now Don Vito has died. A new godfather has taken his place—Michael.

Yes, the same Michael who declared in the opening, “That’s my family, Kay. It’s not me.”

In the office, we see the capos pledging their loyalty to the new Don, even kissing his hand. They address him not as “Michael” but as “Don Corleone,” i.e. the title by which his father ruled.

In the adjacent room (the foreground as seen by the camera) stands Kay. She is now Michael’s wife. In the immediately preceding scene, in the office, she had confronted her husband, demanding to know if he (as Michael’s sister Connie had just passionately attested) had had Connie’s husband Carlo murdered. “This one time only,” Michael tells Kay, “I’ll let you ask me about my business.”

Then he lies straight to her face. “No,” he says. Meaning he didn’t order the killing.

Kay hugs her husband, massively relieved. She exits the office.

Now outside, she continues the task of packing up the house (the Corleone family is making the move to Las Vegas.)

As Kay does so, one of the capos in the office starts to close the office door.

The camera position now shifts to a POV from inside the office. We’re looking out of the office toward Kay as the door closes, excluding her—as we in the audience have understood from the start—from all knowledge of the family business. 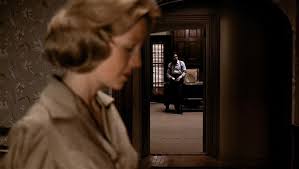 Neither of these moments, the Opening Images or the Closing Image, is an accident. Both were carefully, brilliantly crafted to be the bookends of this story. To adhere to the principles of Ins and Outs. To be 100% on-theme. And to show how much the hero has changed.

Michael is the hero. In the opening sequence, Michael (like Shane when he first entered the Valley) believed that he could change his destiny and his family’s destiny. He could be the Marine war hero with the Mayflower-American wife. He could be, unlike Bonasera, a real American.

By the story’s end, Michael knows he cannot. The bonds of family and the need to protect it (even, especially, from his American wife Kay) are too strong. The society-within-a-society remains intact. Nothing can overturn it.

What makes The Godfather so great (among many other things) is the scale of its theme—the multi-generational struggle of an immigrant clan to find acceptance while maintaining its ethnic integrity in a greater, more powerful established nation that rejects it.

That was Bonasera’s issue in the Opening Image.

It was Michael and Kay’s issue immediately thereafter in the Wedding Sequence.

And it’s the issue and theme that is brought to conclusion in the Closing Image.