We’ve been talking in this series about Ins and Outs—Opening and Closing Images in books and movies. 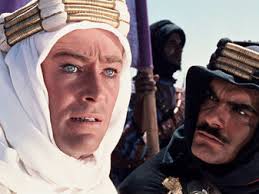 Peter O’Toole and Omar Sharif in “Lawrence of Arabia”

The Opening and Closing Images of our story should resonate with each other. They should look as alike as reasonably possible.

An example we cited was the 1953 Western Shane, where the lone-rider hero (played by Alan Ladd) enters the Valley on the In and exits via the exact same path on the Out.

At the same time, the Out should be as far away as we can make it in emotional and narrative terms from the In—to show the extent of the change that the hero has undergone.

Again citing Shane, we saw that our hero entered the Valley with hopes of changing his life and exited knowing those hopes would never come true.

Let’s assay a third rule of Ins and Outs Club:

Both the In and the Out must be on-theme.

The movie starts in the driveway of a cottage in Dorset. A youngish man (Peter O’Toole as Lawrence) readies his motorcycle—a 1935 Brough Superior SS100—and rides off down a narrow country lane. Fast. Faster. Recklessly fast. Suddenly the rider encounters bicyclists in the road. He swerves, loses control, the bike crashes.

Cut to St. Paul’s Cathedral. A major state funeral is in progress, apparently for the young motorcycle rider. Several dignitaries are approached for comment. They give contrasting statements, linked by the acknowledgment that the young rider was Someone Extraordinary.

Seventeen years earlier. The British and their Arab allies have defeated the Turks in the Middle East theater of WWI. Bedouin warriors, who under Lawrence and their tribal leaders have captured Damascus, have been superseded by regular British troops. They are leaving—going home to their tribal territories.

An open Rolls-Royce military car speeds along a desert road. The driver is a British sergeant. In back sits Lawrence. He is a colonel, in uniform.

The Rolls speeds past a detachment of withdrawing Bedouin fighters mounted on camels. The car’s passage drives the Bedouin momentarily off the road. We see Lawrence rise in his seat with concern. His eyes track the Arab warriors with obvious pain and regret, even heartbreak. “So,” says the sergeant-driver to Lawrence, “Going home!” He means that the prospect of returning to England must be filling his passenger with joy. But Lawrence makes no reply, only sinks into his seat in despair.

At that moment, a British dispatch rider overtakes the Rolls and speeds past, pulling swiftly ahead and racing into the distance. Lawrence’s eyes track the rider wistfully and, seemingly, significantly.

The rider is mounted on a motorcycle.

The theme of Lawrence of Arabia (among a number of others) is the burden of Being Extraordinary.

That’s what the movie is about, above and beyond Lawrence’s military achievements, the valor of the Arabs, the treachery of the Brits, etc.

The In and the Out of Lawrence of Arabia are absolutely on-theme. They work together like bookends. 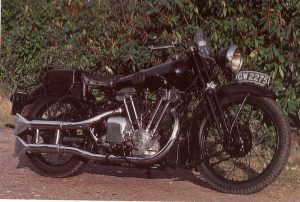 As Colonel Lawrence watches the motorcycle rider speed past him on the desert road and vanish into the distance, we in the audience cannot help but be called back to the opening image of the film. Did Lawrence kill himself deliberately seventeen years later on his Brough Superior? Was his reckless speed intentional, a consequence of no longer being a part of great events? Could Lawrence no longer endure having to live life as an Ordinary Man?

Again, as we said in previous posts of Shane and Alien and Good Will Hunting, the opening and the closing images alone convey a tremendous part of the story.

Each is on-theme, and each works with the other.

They are the movie in microcosm.

Together the In and the Out frame the narrative and contain its meaning.