The men were silent and they did not move often. And the women came out of the houses to stand beside the men—to feel whether this time the men would break … The children stood nearby, drawing figures in the dust with bare toes … Horses came to the watering troughs and nuzzled the water to clear the surface dust. After a while the faces of the watching men lost their bemused perplexity and became hard and angry and resistant. Then the women knew that they were safe and that there was no break.

Feel the power in this passage from John Steinbeck’s The Grapes of Wrath? 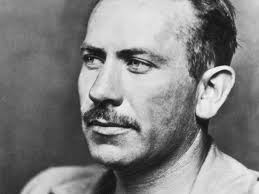 John Steinbeck was awarded the Nobel Prize for Literature in 1962

Why does this simple passage work so well?

I think it’s because it’s written like a movie.

The characters’ feelings are conveyed to us (almost) only by what we can see from the outside.

In other words, we’re seeing like the camera sees.

No statements or descriptions of emotion.

There’s not even any dialogue.

The passage is powerful because we, the readers, are compelled by the writer’s technique to participate in the drama. We see the men silent, the women watching, the children tracing in the dirt with their toes. We see the expressions on the men’s faces and we think (we can’t help but think), These families are at the brink. Their land is drying up, their crops are dying. They are close to panic, close to giving in.

But no one states this overtly.

Not the characters and not the narrator.

We the readers supply all of that ourselves.

What makes movies so powerful when they’re done right is that they can show us faces and postures (i.e. non-verbal cues) and make us read emotion into those cues. We think to ourselves, Jackson Maine (Bradley Cooper) is falling in love with Ally (Lady Gaga) in the drag club scene in  A Star is Born, even though he hasn’t yet said a direct word or made the slightest romantic move in her direction.

Steinbeck was a master at portraying emotion on the printed page, not by overt statement or in dialogue but by describing the scene and the action from the outside, the way a camera would see it—the motion and the stillness and the hesitation and the action of the characters.

You and I can do it too, in our books and our plays.

We can write them (or at least parts of them) like a movie.

I put the mail on the table, went back to the bedroom, undressed and had a shower. I was rubbing down when I heard the door-bell pull. I put on a bathroom and slippers and went to the door. It was Brett. Back of her was the count. He was holding a great bunch of roses.

There’s a reason why Ernest Hemingway won the Nobel Prize and it wasn’t just because he used short words.

Ernest Hemingway picked up the prize in 1954

It was Brett. Back of her was the count. He was holding a great bunch of roses.

It may seem on first reading as if no particular emotion is being conveyed in this passage. What’s happening, we may think, is only the magic of black marks on paper creating a cinematic image in our mind.

But if we look a little closer …

We see the door opening.

Then we see the count.

Then we see the great bunch of roses.

That’s exactly the way the eye works, isn’t it? It’s precisely the order and sequence of the way you or I, opening the door of our flat in Paris, would see someone standing there, then another person standing behind them, then whatever that second person happened to be carrying.

But what Hemingway does is show us this through the eyes of our narrator, Jake Barnes (who’s in love with Brett but whose manhood has been shot away in the war), who wants on this particular evening only to be left alone after his shower and now is being summoned forth by the obligation of good fellowship to a night of drinking and carousing that is going to tear his guts up.

All this in six short sentences with no dialogue and no overt expression of emotion.