The Gods Rule by Acclaim

Did you see Oliver Stone’s 2004 movie, Alexander, about Alexander the Great? Indeed it was not one of Mr. Stone’s best, as I suspect he himself would admit if we got him drunk enough. 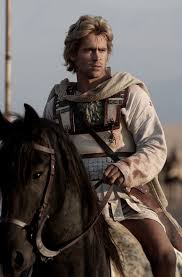 Colin Farrell in the title role of Oliver Stone’s “Alexander”

But the film did have a great one-sheet promo line:

(The phrase comes from a Latin proverb, variously rendered as audentes Fortuna iuvat and Fortuna audaces iuvat among others.)

Here’s a true story of Alexander from Diodorus and other ancient sources:

When he was preparing to march out from Macedonia to commence his assault on the Persian Empire, Alexander called the entire army together, officers and men, for a great festival at a place called Dium on the Magnesian coast.

When all the army had assembled, Alexander began giving away everything he owned. To his generals he gave great country estates (all properties of the Crown); he gave timberlands to his colonels and fishing grounds, mining concessions and hunting preservers to his midrank officers. Every sergeant got a farm; even privates received cottages and pasturelands and cattle. By the climax of this extraordinary evening, his soldiers were begging their king to stop. “What,” one of his friends asked, “will you keep for yourself?” “My hopes,” said Alexander.

When you and I launch ourselves upon a new book or screenplay or videogame or TV series, we are like Alexander.

We are invoking Fortune (a goddess, remember, and thus divine), just as he did.

Here’s another way of putting it:

If you build it, he will come.

In other words, the bigger the idea, the bolder the venture, the better.

Write the book you can’t write.

Alexander believed that the gods rule not by power but by acclaim. Remember that for all the great conqueror’s rationality (his tutor as a boy, after all, was Aristotle) he remained at heart a wild northern highlander and a warrior of primal, even primitive origins. The gods were not fancies to him. They existed. They were real.

Man bows before the immortals, Alexander believed, because of their greatness, their beauty, their transcendent majesty. Beholding Athena or Apollo (or even demi-gods like Herakles and Achilles) we humans have no choice but to respond with awe and veneration … and to follow and obey, if these beings should so charge us.

But Alexander drew a further corollary from this faith.

He believed that the gods would take our side if only we acted with enough courage, audacity, and defiance of death. In other words if we acted like them.

Alexander believed that we mortals could compel heaven’s intercession by our own actions, if they possessed sufficient thrasytes, boldness, and andreia, martial valor.

Not only would the gods intercede in such cases, but they had no choice.

Why did Alexander—not the myth but the actual historical man—lead his Companion cavalry from the very front in their charge at the enemy? Why did he wear a double-plumed helmet and distinctive armor, so he could be recognized at any distance on the field?

Yes, he took the lead to act as an example. To fire his men to emulate his valor.

But more critically, to his mind, Alexander was acting for an audience on Olympus.

He believed that when heaven beheld him aboard his warhorse Bucephalus striking the foe before any other, it would be powerless to resist interceding in his aid.

“Fortune favors the bold” is a mighty truth, even if it can’t be proven empirically in a laboratory or on a blackboard by mathematics.

Write the book you can’t write.