The Villain Speech in “Vice”

We said in last week’s post that the Villain sees the world as a zero-sum game.

This is a corollary to another aspect of the classic antagonist’s view of life as a war of all-against-all. To re-quote Colonel Nathan Jessup (Jack Nicholson) from Aaron Sorkin’s A Few Good Men:

This is the exact POV that the filmmakers of Vice (written and directed by Adam McKay) give to their protagonist villain, Dick Cheney. In the final scene of the film, the VP is being interviewed for television. 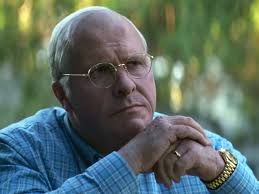 Two-thirds of Americans believe the Iraq War was not worth fighting. They’re looking at the value gained versus the cost in American lives and Iraqi lives.

This quote, as I understand it, is literally true. The real Dick Cheney really did say it. If so, it is world-class Movie Villain material, worthy of Dr. No or Dr. Strangelove.

But the filmmakers don’t stop here. They use this line to jump off from, into a fuller expression of the Villain’s point of view. They have Cheney turn slowly toward the camera until he “breaks the fourth wall” and addresses the audience directly.

So, don’t you care what the American people think?

I think you … uh … cannot be … uh … blown off-course. (Sighs, turns further to speak directly to the audience). I can feel your recriminations and your judgment … and I am fine with them. You wanna be loved. You wanna be a movie star. The world is as you find it. You have to deal with that reality. There are monsters in this world. We saw three thousand innocent people burned to death by those monsters. And yet you object when I refuse to kiss those monsters on the cheek and say “Pretty please.” You answer me this: what terrorist attack would you have let go forward so you wouldn’t seem like a mean and nasty fella? I will not apologize for keeping your family safe and I will not apologize for doing what needed to be done so that your loved ones can sleep peaceably at night. (Sighs). It has been my honor to be your servant. You chose me. I did what you asked.

I confess I’ve always had a soft spot for Dick Cheney. The point of view he articulates (and that he acted upon and unrepentantly holds to this day) certainly cannot be called inaccurate or untrue to certain “realities” of the world and of human nature. Caesar would have echoed this view of life, as would have Alexander and Napoleon and scores of other real-life champions to whom we erect equestrian statues—and with good cause.

But this point of view—however practical, “realistic,” or even necessary in a Hobbesian world—is the point of view of the Villain. 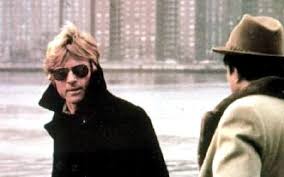 Robert Redford and Cliff Robertson in “Three Days of the Condor”

Today it’s oil, right? In ten or fifteen years, food. Plutonium. Maybe even sooner. Now, what do you think the people are gonna want us to do then?

(We’ll dig a little deeper into this—and consider the nature of the non-zero-sum character, the Hero—in the next few posts.)