The Mystery Makes the Hero Choose

Let’s stay with Blade Runner in this post, but let’s go back to the 1982 original starring Harrison Ford and Sean Young and directed by Ridley Scott (screenplay by Hampton Fancher and David Webb Peoples.) 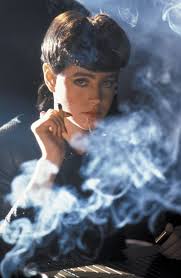 Sean Young as Rachael in the 1982 “Blade Runner”

If indeed, as we’ve been positing in previous posts,

The male’s role is to uncover the mystery,

then what happens when he (remember, the “male” can be a female too, as long as she acts in the archetypal rational/assertive/aggressive style of a male) does uncover the mystery?

Answer: he is thrust into a moral crisis.

He is forced to choose.

In the 1982 Blade Runner, the mystery is carried by the character of Rachael (Sean Young.)

The male hero is Blade Runner Rick Deckard (Harrison Ford). His profession is to hunt down and “retire,” i.e. kill, the artificial humans called replicants. In one of the movie’s opening scenes Deckard is sent to the Tyrell Corporation, manufacturer of the new Nexus 6 series of replicants, to test one of these new models on a “Voight Kampf machine.” The machine can tell if a subject is a real human or a replicant.

The founder of the corporation, Eldon Tyrell (Joe Turkel), has other ideas however. He wants Deckard to use the machine on a real human first.

I want to see a negative before I provide you with a positive.

He summons Rachael (Sean Young), introducing her as his assistant. Deckard runs the test. Sure enough, the machine says Rachael is a replicant.

Though Deckard ends the test without comment, Rachael reads this in his eyes.

Up to that moment, Rachael had no clue that she was artificial. She thought she was a human.

See how she’s “carrying the mystery?”

The movie’s “A” story is already rolling. Deckard has been ordered to track down a team of rebel replicants including Roy (Rutger Hauer) and Pris (Daryl Hannah) who have highjacked an Off-World shuttle and come to Earth with designs of mayhem.

Deckard plunges in to tracking them down.

There’s only one problem.

He has fallen in love with Rachael.

At the same time, Rachael is reeling emotionally from the discovery of her true identity. If she is artificial, what is she? Does she have a soul? Is she human? She has completely convincing memories from childhood. Where did they come from? Implanted by the Tyrell Corporation? Then who or what is she?

Remember too that Deckard’s job is to kill replicants. 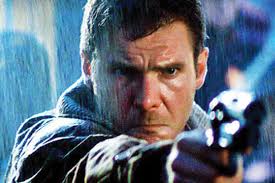 Harrison Ford as Rick Deckard in the 1982 “Blade Runner”

Does that mean he must kill Rachael? Yes, says his cop boss Bryant (M. Emmet Walsh).

To make the moral choice even harder for Deckard, in one shoot-out on the street, Rachael saves his life by killing a replicant who’s about to murder Deckard. Now he owes her.

Then there’s the ultimate kicker:

That Voight-Kampf test of yours. Did you ever take it yourself?

By this point in the story, Deckard’s entire world has been turned on its head. He has become 100% emotionally involved in Rachael’s dilemma. He loves her. Her pain has become his pain. But if he doesn’t do what his role as a blade runner commands him to, the consequences for him are as fatal as they are for Rachael.

What is he going to do about this?

when the “male” uncovers the mystery carried by the “female,” he is forced to make a moral choice.

A choice that constitutes the theme and soul of the story.

In Chinatown, Jake Gittes (Jack Nicholson), coming face to face with the mystery embodied by Evelyn Mulwray (Faye Dunaway), must make a choice.

If you haven’t seen the 1982 Blade Runner, I won’t spoil the ending for you. Suffice it to say, Deckard does what a hero is supposed to do.

Confronting the mystery, he makes a choice.