Every great second act has a midpoint. In this instant something happens that ratchets our entire story to a higher level. The stakes go up, way up. 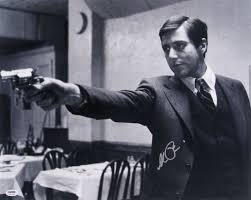 “But if Clemenza can figure a way to have a weapon planted there for me … then I’ll kill them both.”

Characters whom we thought we understood must suddenly be viewed in an entirely different, and far more serious, manner. The story upshifts. Every relationship in the narrative alters. Until this moment, we had thought the drama was about “X.” At once we understand it’s about “X squared.”

They want to have a meeting with me, right? It’ll be me, McCluskey and Sollozzo. Let’s set the meeting. Get our informers to find out where it’s going to be held. Now we insist it’s a public place, a bar, a restaurant, some place where there’s people so I feel safe. They’re going to search me when I first meet them, right? So I can’t have a weapon on me then. But if Clemenza can figure a way to have a weapon planted there for me … then I’ll kill them both.

This speech from Michael Corleone (Al Pacino) is the midpoint of The Godfather. If it ain’t Shakespeare, it’s pretty damn close.

Consider what happens in this moment.

Up to this juncture in the story, Michael has been at best a minor helper in the emergency that is engulfing the Corleone family. His quick thinking has saved his father the Don (Marlon Brando) at the hospital, but otherwise his brother Sonny (James Caan) and the capos have tried to protect Michael and keep him out of the central action. Recall that, at this point in the story, Michael is still in essence a civilian—a Marine Corps captain freshly home from WWII, with an innocent, non-family fiancee, Kate (Diane Keaton), with whom he intends to make a life outside of the Mob and its business.

That’s how we—and all the characters in the movie—perceive Michael at the start of this scene.

By the scene’s finish, sixty seconds later, every assumption has been overturned. We realize that Michael is the hero of this drama. The Godfather is his story, not the Don’s, and he will turn out to be the rightful (and only possible) heir to his father’s empire.

Director Francis Ford Coppolla shoots this speech in one slow “move-in.” Where does he position Michael? Not on a sofa or standing or sitting in a common chair.

Michael sits in the Don’s chair. The camera pushes in … in … in until the frame contains nothing but Michael as he pronounces, “Then I’ll kill them both.”

When you and I as writers enter the Belly of the Beast of our Second Act, we need to know what that “Michael moment” is for our story.

We have to ask ourselves,

What must happen in my story that will raise the stakes dramatically, change the dynamics between all my principal characters, and make the drama suddenly become about a deeper, more profound version of the conflict as I’ve presented it so far?

Knowing we must have a midpoint—and what changes that midpoint must deliver—will help us enormously when we encounter the despair of Act Two, the writer’s struggle as she enters the Belly of the Beast.