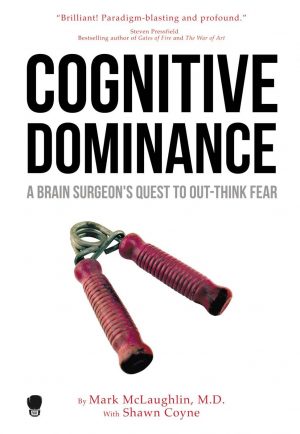 Get a Grip on Fear

Artists and warriors live and die by one primal emotion.

Fear stops us from beginning our work. Or carrying it forward in the face of adversity. Or completing it when we’re so, so close.

About a year ago, my biz partner Shawn Coyne told me he was working, with neurosurgeon Mark McLaughlin, on a book about fear.

My nervous system perked up immediately.

Shawn gave me the thirty-second pitch.

Have you ever thought about the fear that a neurosurgeon faces when something goes wrong? While cutting open or delicately tweaking somebody’s brain? One false move and the surgeon can kill or permanently disable the innocent and helpless patient on the operating table—perhaps a young child. The surgeon, under life and death conditions (which may require critical decisions in microseconds), must act in the face of often-near-paralyzing uncertainty and fear.

How does one do this? Apparently it’s not a subject that’s taught in medical school.

The individual surgeon, Mark McLaughlin says, has to develop their own method.

That’s what Shawn and Mark’s book is about.

They call it Cognitive Dominance: A Brain Surgeon’s Quest to Out-think Fear.

Cognitive meaning “of knowing … of awareness.” Dominance meaning “the capacity to act with deliberation and power … to ascertain the right response to an emergency and to implement it.”

What came out of Mark McLaughlin’s exploration of his own mental (and emotional) process in the face of fear is an entire life-encapsulating philosophy—and one that applies directly to you and me as writers and artists.

Fear, Mark McLaughlin says, forces us to pay attention. It compels us to decide and to act in the face of extremity. Fear is a survival mechanism. Fear is primal, ancient, inescapable.

Cognitive Dominance is a Big Idea book wrapped inside of a memoir about a guy trying to get out from under a very traumatic event that threatened his career and very sanity.

Full disclosure: Cognitive Dominance can get a little wonky. Shawn and Mark get deep, deep into the weeds. I love that. The model of the universe that they evolve is as detailed as a Special Forces operational order and as profound as a treatise from the Kaballah. I recommend it at the five-star level.

Plus right now we are running a deal where you can get the paperback and the ebook at a discounted price.