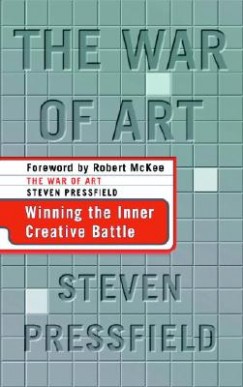 The eBook "cover" takes off from the original hardback cover

I had just received the umpteenth note—this time via Facebook—from a frustrated reader who was trying to order the Kindle eBook of The War of Art. (The Amazon page has been crashing regularly since it first went up.)  “Why,” the reader wanted to know, “does Amazon keep saying there’s no such book? And why can’t my wife get The War of Art for her iPad?”

I responded on Facebook by apologizing for the mess and explaining the various tech and contractual problems. To my surprise, I got a message right away from a third party, who happened to have spotted the exchange. His name is Michael Ashley and he wrote back: “I’ve got a new company and I can fix this whole snafu for you.”

A week later we were in business. Michael’s company, FastPencil, is setting things up so that The War of Art can be ordered for Kindle or Ipad, Nook, SONY and a bunch of other eBook platforms. The price will be determined by the individual platforms (somewhere around the standard $9.99) once all systems are up. But for two days next week—October 20th and 21st—the book can be ordered from this site only for $1.99.

FastPencil is an interesting company. It’s fun for me to work with people who are young and hungry, who are at the tech cutting edge and who have big plans and dreams. FastPencil does hardback, paperback and on-demand publishing too; they’re in the process of corraling a stable of writers right now for a new imprint they just launched last week. If you’re a writer and you’re struggling with the same eBook problems I was, shoot an e-mail to Michael Ashley, [email protected], or Steve Wilson, [email protected] Michael is the CTO and Steve is the CEO/Prez. They’re hungry!

I’d also like to thank Seth Godin, Jeff Sexton, Mark Safranski, Mark McGuinness, Jonathan Fields and Justine Musk, among others who have opened my eyes to some of the new ways for writers to reach their audiences.

The War of Art eBook for a buck ninety-nine for two days next week! today and tomorrow!

I’ll send reminders via Facebook and Twitter on Tuesday and will do a post here that Wednesday, with a widget that will make everything happen with a couple of clicks.

For more information about the eBook and lessons learned from writing about a carton of eggs, visit the Oct. 20 Writing Wednesdays post.