[The blog is on vacation this week. Herewith an “encore presentation” of a fave from the past:]

I never talk about a project I’m working on. It’s bad luck. But something happened a few nights ago that made me think I should make an exception, both for the sake of my own thinking and for sharing an insight or two. So I’ll keep depiction of the project vague but the wisdom as clear as I can make it. 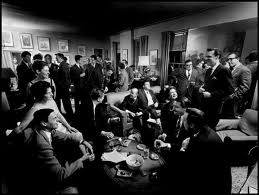 Never listen to what they tell you in rooms like this

I was at a professional event with a friend who, each time he introduced me to a new acquaintance, described and made a pitch for the project I’m working on. (Don’t ask why.) He did this a number of times despite my excruciating embarrassment.

Bottom line: everyone he told the idea to went catatonic with boredom. Their eyes glazed over. They began edging toward the exit. Though they were too polite to say anything overtly negative, it was clear that they regarded me and my enterprise the way one might a Comic-Con trekkie describing his plans for solar self-levitation or, perhaps, Newt Gingrich flogging tickets for his colony on the moon.

The people at the event were by no means imagination-challenged “suits.” They were bold, savvy artists and entrepreneurs. Almost every one had multiple success stories across all spectrums of art, tech, and business.

And their reaction to my project was universal snooze-o-rama.

They can’t see what I see.

They have a superficial conception of what I’m planning to do, but they have no idea of how I’m going to do it.

Then I asked myself a second question: Does negative response make you consider giving up?

Answer: not for a nanosecond. I don’t care what anybody thinks. I’m seized by this project and that’s it.

I thought about books of mine from the past. From Bagger Vance to Gates of Fire to The War of Art, practically no one has believed in them at the concept stage. (With the exception of Shawn—which is why he and I are partners today). Most people thought I was crazy. “That idea? It’s been done a hundred times, nobody cares about that any more, what can you possibly say that hasn’t been said already?”

There’s an axiom among artists and entrepreneurs: to succeed, you have to be arrogant or ignorant or both. What that means is you have to blow off every response that says it’ll-never-work. Be arrogant. The nay-sayers are idiots. Or ignorant. Stay stupid and plunge ahead.

I kinda like the idea of a colony on the moon. And I’m not so sure there’s no future in solar self-levitation.

In other words: self-reinforcement.

One of the hallmarks of the true professional is her ability to be her own best friend. Sometimes when I’m driving, I’ll phone home and leave a message for myself.

Steve, we’re behind you, brother. Don’t let anybody tell you you can’t do it. Keep the faith, partner. You are on course and on target!

I always laugh when I get home (because invariably I forget that I’ve left myself the message). But the point is serious.

Almost no one recognizes a good idea. And the bolder the idea, the more people will be blind to it. If you’re seeking reinforcement from outside yourself, you’re in for a long, lonely haul. The answer to self-doubt is self-reinforcement.

Lindbergh made it to Paris, and you and I can too.