Paul Schrader is the much-honored director and screenwriter (Taxi Driver, Raging Bull, many others) and, for me, a major role model for many years. Here’s what he said in an interview once on the subject of pitching a film idea: 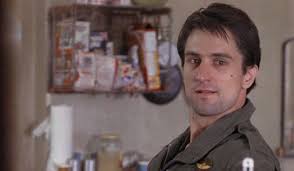 "You talkin' to me?" Robert DeNiro in Taxi Driver.

I’ve stolen this system lock, stock, and barrel. It’s exactly how I pitch. One of the secret weapons here is “killer scenes.” Why? Because a killer scene gives the writer a chance to get on his feet in a meeting and act out a part of the movie he’s seeing in his head. Moments like this, when they work, can be dynamite. The writer gets to show off his passion and enthusiasm. Often this is more important that content or reason or even dollars and cents. Think of Taxi Driver. Can you imagine Paul Schrader in a meeting, acting out the “You talkin’ to me?” scene that Robert DeNiro later made immortal?

Another critical aspect of Schrader’s pitching philosophy is keeping it brief. “Any more gets in the way.” It’s a terrible mistake to over-pitch. Attention spans are short. You want to get in, fire your broadside, and get out. But you can’t make it too short or your audience won’t get it, they won’t see the movie (or book) that’s in your head.

Schrader’s method, to me, is just right weight-wise and length-wise.

It’s also an invaluable conceptual tool for you and me as writers, even if we have no intention of pitching our stuff to anybody. Schrader’s principles are like the Foolscap Method, or the Clothesline Method, or the David Lean Rule. They’re a way for you and me to get a bead on our story, particularly when we’re still wrestling with it in the early stages, just for ourselves. Schrader’s principles help us answer these critical questions:

1. Is my story interesting?

2. Is it dramatic? Does it have horsepower? Will it hook the reader?

3. Is it actually about something?

In the Foolscap Method, we ask ourselves of our story:

The point is to give ourselves a view of the story in total, from start to finish. Why do we need this? Because of Resistance. Because Resistance will tempt us to plunge in to our tale in a half-assed manner, before we know where we’re going and before we’re sure what we’re trying to accomplish.

Applying Paul Schrader’s principles is one way to beat this trap. Like the Foolscap Method, it makes us pare down our story to its essentials. (“Any more gets in the way.”) But, even more important, it makes sure that we have all the essentials, that we’ve left nothing out.

Think about it. If we’ve got, as Paul Schrader suggests, an opening and an ending (in other words, Act One and Act Three); if we have a clear idea of the spine of the story and the evolution of the main character or central relationship (in other words, Theme and Act Two); and if we’ve got a couple of killer scenes along the way (i.e., our story is about something) … wow, all that’s left is filling in the blanks.

I love the idea of “killer scenes.”

The Godfather: Michael kills Sollozzo and the police captain in Louis’ restaurant in the Bronx.

When Harry Met Sally: “I’ll have what she’s having.”

Killer scenes are critical in a pitch meeting (or just in our own heads as writers) because they bring the story to life. The prospective financier (or you and I in our own minds) can say, “Yeah, I see this movie. It’s got real ass-kicking moments. It’s gonna be great!”

Killer scenes give us confidence as writers. They fortify us against Resistance. Knowing we’ve got two or three killer scenes reassures us that our story is cooking, that it’s about something, that’s it’s not bloodless or intellectual. And they’re fun. Readers love ’em, actors love ’em, audiences love ’em.