Have you seen the movie Cop Land? It’s a vastly underappreciated 1997 film written and directed by James Mangold, who also did Girl, Interrupted, Walk the Line, and 3:10 to Yuma. The script for Cop Land was good enough to attract Robert De Niro, Sylvester Stallone, Harvey Keitel, Ray Liotta, Anabella Sciorra. It even got Edie Falco (before she became Carmela in The Sopranos) in a no-dialogue, ten-second cameo.

But what I like most about it is the Villain Speech. 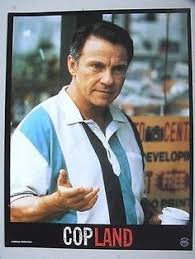 The story revolves around the idea that a group of corrupt NYPD cops, in bed with the Mob, has managed to create a safe enclave for themselves and their families outside the city, across the George Washington Bridge, in the small town of Garrison, New Jersey.

Sylvester Stallone plays the sheriff of this town, Freddy Heflin. Deaf in one ear, Freddy could not qualify for the NYPD, his lifelong dream. Poor Freddy is pushed around and condescended to by the New York cops living in Garrison but finally, forced to confront evidence of their wrongdoing, including murder, he arrests a central figure in their scheme, a hotheaded cop named Superboy (Michael Rapaport). Freddy plans to take Superboy in. In an eleventh-hour gesture of cop-to-cop fraternity, Freddy goes to the town bar and informs Ray (Keitel) of what he intends to do. Ray is the ringleader of the dirty cops and has tried twice already to murder Superboy. Freddy offers Ray the chance to turn himself in too.

Plainly Ray will never let Freddy do what intends—and neither will any of the other half dozen cops in the bar witnessing this exchange. They will kill Freddy first.

Freddy, listen to me. I invited men … cops … good men … to live in this town. To make a living, they cross that bridge every day to a place where everything is upside-down, where a cop is a perp and a perp is a victim. But they play by the rules. They keep their guns in their holsters and they play by the rules. The other thing they did was they got their families out. Before it got to them. We made a place where things make sense, where you can walk across the street and feel safe. Now you come to me with a plan to set things right, where everybody will be holding hands and singing ‘We Are the World.’ That’s nice. But, Freddy, your plan is the plan of a boy. You made it on the back of a matchbook. Without thinking. Without looking at the cards. I look at the cards. I see this town destroyed. That’s not what you want, is it?

I look at this town and I don’t like what I see no more.

Who the fuck do you think you are?

The sheriff of Garrison, New Jersey.

Then be a sheriff! Defend this town! Protect these men! 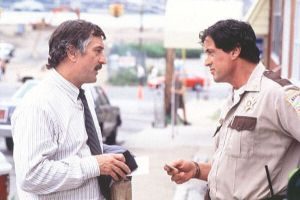 Four qualities are spot-on in this speech. These are common to all great Villain Speeches and they always work.

First, Ray does not see himself as the Bad Guy. In his mind, he’s the hero. He has created in Garrison a safe haven for good men and their families. The villain in Ray’s view is Freddy, for daring to try to overturn this world.

Second, Ray’s logic, from his point of view, is irrefutable. Given his feeling about Garrison and the cop families who have made secure lives here, it makes perfect sense. If you and I were in Ray’s shoes, we would make the exact same case.

Third, Ray’s point of view is based upon “reality” and perceives anyone who would contest it as naive and deluded. The Greater World is corrupt, says Ray. Upside-down. The only way a reasonable person (a “man”) can operate in such a world is to recognize its “reality” and act according to its rules—in other words, be just as crooked as it is.

Fourth, implicit in Ray’s speech (and in the aspect of his grim-jawed police allies looking on) is the idea that no logic, no reason, no appeal to right and wrong can or will sway him. If Freddy tries to bring Superboy in, Ray and his buddies will kill him.

The final element of this speech that is interesting to me is that its logic is that of the Smaller World, in this case the universe of the cops in Garrison and their families. Ray’s logic works for them (if he can pull it off).

Only Freddy the Sheriff is looking to the Larger World. Only he asks the question, “What if everybody acted according to your logic?” Were Freddy to ask this question, how would Ray respond? He’d say something, I imagine, like this:

Everybody does act like that, Freddy. Open your eyes. The city. The country. How wide you wanna go? Wise up! This is life. This is how the world works.

Villains are great fun to write, aren’t they?