The Female Protects the Mystery

We said in last week’s post, speaking of novels or films with characters of both sexes, that

This principle, true as it is, is not enough to make a story work. In addition

The female protects the mystery.

Every story has a secret. Every tale has a meaning, an interpretation of depth.

The protagonist’s role (either a male, or a female acting in a “male” capacity) is to uncover that secret.

In Robert Towne’s script of Chinatown, the protagonist is private eye Jake Gittes (Jack Nicholson). His role in the drama is to get to the bottom of the “case”—to find out who murdered Hollis Mulwray, who hired him (Jake) and put him on this case, and what greater, deeper, more hideous crimes these first two issues conceal.

Evelyn Mulwray (Faye Dunaway) is Jake’s client. She is the character who carries the mystery. She knows the answers to all these questions.

And, critically important for the story, she conceals them.

Evelyn knows what Jake, at the start, doesn’t. She knows the crimes her father Noah Cross (John Huston) has committed. She knows the further, even more despicable crime he’s trying to commit in the present.

For her own reasons—primarily to protect her daughter Catherine, but also to shield her own shame—Evelyn will resist to her final breath revealing these secrets.

For us as storytellers, this is exactly what we want.

We want in our stories a character who conceals the tale’s secret—i.e., its theme, its metaphor, its meaning—and who will do anything to maintain that secret.

Why do we want that? Because it provides powerful, drama-producing obstacles for our protagonist to overcome.

In some stories, like Chinatown, the female who carries the mystery knows what the mystery is. She’s aware of it. She’s deliberately concealing it.

In others, the “female” carrying the mystery doesn’t know it at all. She’s blind to it. She’s ignorant of it.

Dr. Ana Stelline (Carla Juri), the memory-maker in Blade Runner 2049, is unaware that she is the daughter of Rick Deckard (Harrison Ford) and Rachael (Sean Young) and that she is thus the “miracle” that proves that replicants can reproduce and therefore possess souls and have hope for the future. 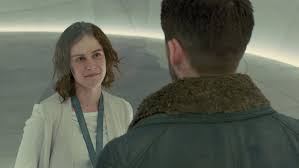 She carries the mystery but is unaware of it.

Likewise Cathy Whitaker (Julianne Moore) in Far From Heaven is utterly clueless to the mystery of self-delusion and willful blindness that she carries.

This obliviousness works in story terms in both cases because it serves the same narrative purpose as Evelyn Mulwray’s conscious concealment—it keeps the protagonists (K [Ryan Gosling] in Blade Runner 2049; in Far From Heaven, Cathy Whitaker herself) laboring against powerful obstacles throughout the story to unravel the mystery.

A third category of mystery-carriers (and mystery-protectors) consists of primal or societal forces like the sea in Moby Dick or the farmers’ rice fields in Seven Samurai. Though these are not literally female, they are so metaphorically.

These also work story-wise because they cannot reveal their mystery. They are the mystery.

The takeaway for you and me as storytellers is that

One character in our drama must carry the story’s secret

and that character—for reasons of conscious will, ignorance, or incapacity—must present a monumental obstacle to the uncovering of that secret.

The female protects the mystery.