In the past two posts we’ve been exploring the story idea that “the female carries the mystery.”

But what exactly does “female” mean? 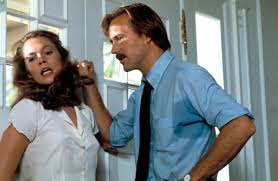 The feminine is chaos, the masculine is order. Mountains are masculine, water is feminine, etc. But [“the] female carries the mystery” is a more nuanced understanding of chaos. Well, she does conceive, carry, and give birth, but it is a complete mystery how the conception took place, what is developing in utero, and what specific impact that offspring will have, right?

I confess I’m treading tentatively into this concept myself. Here’s another take from The Kybalion (1912, the Yogi Publication Society) expounding on one of the seven principles of Hermetic philosophy—the Principle of Gender:

The office is Gender is solely that of creating, producing, generating, etc. and its manifestations are visible on every plane of phenomena … the part of the Masculine Principle seems to be that of directing a certain inherent energy toward the Feminine Principle, and thus starting into activity the creative processes. But the Feminine principle is the one always doing the active creative work—and this is so on all planes. And yet each principle is incapable of operative energy without the assistance of the other.

In story terms, whatever element or character we might call “female” is the one that contains the “answer” to the question posed by the story itself—and that answer, at its most profound, is always a mystery.

I wrote, two posts ago, that I thought the feminine in Moby Dick (a book without literally female characters) was the ocean itself, the unfathomable depths of the sea. And that the female in Seven Samurai (a movie without a primary feminine character) was the flooded rice fields that the villagers were planting in the final scene.

Both these “female” elements are primal, elemental, ultimately unknowable—and of course cosmically “creative.” Both are the sources of life. And in both cases, how the feminine produces that life (as Andrea Reiman says above) is an absolute mystery. 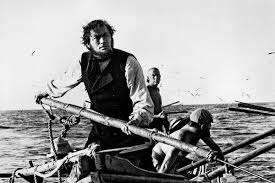 The male element and the female element (with Gregory Peck as Captain Ahab) in “Moby Dick.”

Neither story universe could exist without these female elements. They are the ground and foundation of the worlds of both sagas. All the “male” action in each drama—that taken by the whalers in Moby Dick and the bandits, the villagers, and the samurai in Seven Samurai—is about attempts to penetrate, conquer, understand, and achieve dominion over the “female” element, which is ultimately unconquerable and unknowable.

In both stories, the male stands in awe of the female (though he may never overtly articulate this), while striving simultaneously to overpower it and surrender to it. This struggle/attempt at union is what produces the drama. It’s what makes the story.

The seminal male-female union/clash in contemporary books and films seems to be the Detective (or the male lover) and the Femme Fatale (or damsel in distress.) Think Chinatown or Body Heat or Farewell, My Lovely. In such stories, as with Moby Dick or Seven Samurai, the male principle becomes bewitched by or drawn by powerful passions into a literal mystery (a crime, a backstory, a traumatic past) whose unknown element is held by, defended by, and often manipulated by the female.

The story itself is the record of the attempt(s) by the male principle to “get to the bottom” of that mystery held and protected by the female.