The Villain Believes in the Mean Streets

[Continuing our series on Bad Guys in film and fiction … ]

The villain believes in a world of scarce resources and a competition of all against all. 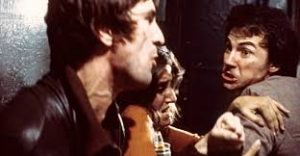 As the villain sees it, the human race inhabits a post-Edenic cosmos, i.e. a universe in which all of us have been kicked out of the Garden (where our needs were provided for in abundance) and are condemned for ever after to scuffle for a living out here on the mean streets. Or, as the tribesmen of Pashtunistan might phrase it,

Or, phrased another way,

And unto Adam He said, Because thou hast hearkened unto the voice of thy wife, and hast eaten of the tree, of which I commanded thee, saying, Thou shalt not eat of it: cursed is the ground for thy sake; in sorrow shalt thou eat of it all the days of thy life; Thorns also and thistles shall it bring forth to thee; and thou shalt eat the herb of the field; In the sweat of thy face shalt thou eat bread, till thou return unto the ground; for out of it wast thou taken: for dust thou art, and unto dust shalt thou return.

The patron saint of the Villain point of view is Thomas Hobbes, the great English philosopher and author of Leviathan (1651), in which he laid out the proposition that all men are born selfish/evil and care for nothing but their own preservation and advancement. He termed this condition the “state of nature.”

In such condition, there is no place for industry; because the fruit thereof is uncertain: and consequently no culture of the earth; no navigation, nor use of the commodities that may be imported by sea; no commodious building; no instruments of moving, and removing, such things as require much force; no knowledge of the face of the earth; no account of time; no arts; no letters; no society; and which is worst of all, continual fear, and danger of violent death; and the life of man, solitary, poor, nasty, brutish, and short.

Hobbes believed that the only viable form of government was monarchy. The human race in his view was incapable of governing itself, i.e. practicing democracy, because each individual under pressure would revert to seeking his own self-interested ends or would bond inevitably with other like-minded partisans (see “political parties”) and act in the same selfish/evil manner, only collectively.

It must be said, though I hate to be the one to say it, that Hobbes has a point.

Indeed most villains have a point.

The tyrant or despot, in his or her own mind, is not operating out of greed or lust for power or the desire to crush his or her enemies. Rather he or she is acting—in his or her own view, that is—as any prudent, responsible person would act, given the fact that the human race is evil and, if society is to avert catastrophe, cannot be permitted to act out of its own blind, self-interested instincts.

When we write our own villains, it’s important to keep this in mind. The Bad Guy, in his own view, is not bad. He’s just being “realistic.”